The Insulation Scarf is the second in a series by the London-based architect – a Dezeen columnist who was formerly a director of the now-defunct FAT.

It features a grey background, with a black pattern based on the insulation symbol.

"Insulation Scarf takes the universal drawing symbol for insulation and applies it to an actual piece of human insulation – the scarf you wrap around your neck," said Jacob.

The Insulation Scarf follows on from the Plank Scarf, which is patterned with the markings seen on pieces of wood.

Similar to its predecessor, the Insulation scarf has frayed edges on either end, and is knitted with just two colours of wool.

Jacobs formerly worked with architects Sean Griffiths and Charles Holland as FAT. The studio was known for its avant-garde, postmodern-influenced design – a topic Holland wrote about for a Dezeen series – but disbanded in 2013 after 23 years. 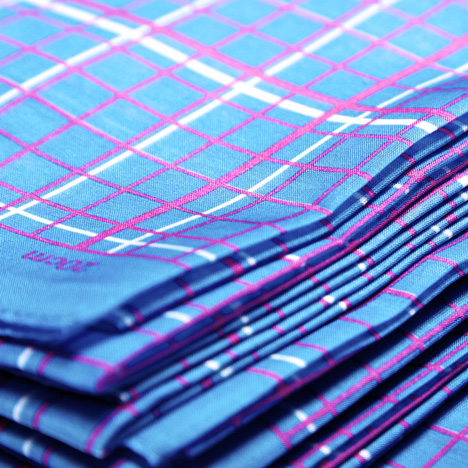 During their time together, the trio designed a housing block in England where an assortment of building typologies appear to be stacked on top of one another and an exhibition dedicated to architectural copying for the Venice Architecture Biennale 2012.

Sam Jacob founded his architecture and design studio shortly after closing FAT. Projects completed since then include an urn for Lenin, which formed part of an exhibition at the Soane Museum, and a replica of a sarsen stone from the Avebury stone circle.