Montreal studio YH2 has completed a retreat for Polish-Canadian sculptor Jacek Jarnuszkiewicz, with a vertical form that takes cues from the surrounding forest (+ slideshow).

The Jarnuszkiewicz House is located in East Bolton, a city in a scenic region of Quebec. Surrounded by conifer trees, the dwelling is situated on a 10-acre (four-hectare) parcel that overlooks Lake Trousers.

It was built as a retreat for Montreal-based sculptor Jarnuszkiewicz, who has created a number of public art installations, including a giant metal sculpture on the McGill University campus that is modelled after a pair of keys.

YH2 – a Montreal architecture studio founded by Marie-Claude Hamelin and Loukas Yiacouvakis – collaborated with Jarnuszkiewicz while conceiving the home.

The team used an "exquisite cadaver" approach – a method devised by Surrealist artists in the 1920s, in which artists collectively build upon a work in sequence, picking up where a former artist left off.

Various compositions for the Jarnuszkiewicz House were debated until the team finally settled on a vertical structure, which references the mature trees on the property and is meant to serve as a "strong and clear expression of the given landscape's essence".

Once the height was decided upon, the team set about designing the rest of the home.

"Once the compositional rules were established, the project was developed from the hand of one creator to the other, from volume to plan, from the handling of materials and masses to the upgrowth of interior spaces," the team said.

The dwelling consists of two interlocking volumes and an angled roof, which is supported on one side by columns. A large cutout in the white roof brings ample daylight into the home. 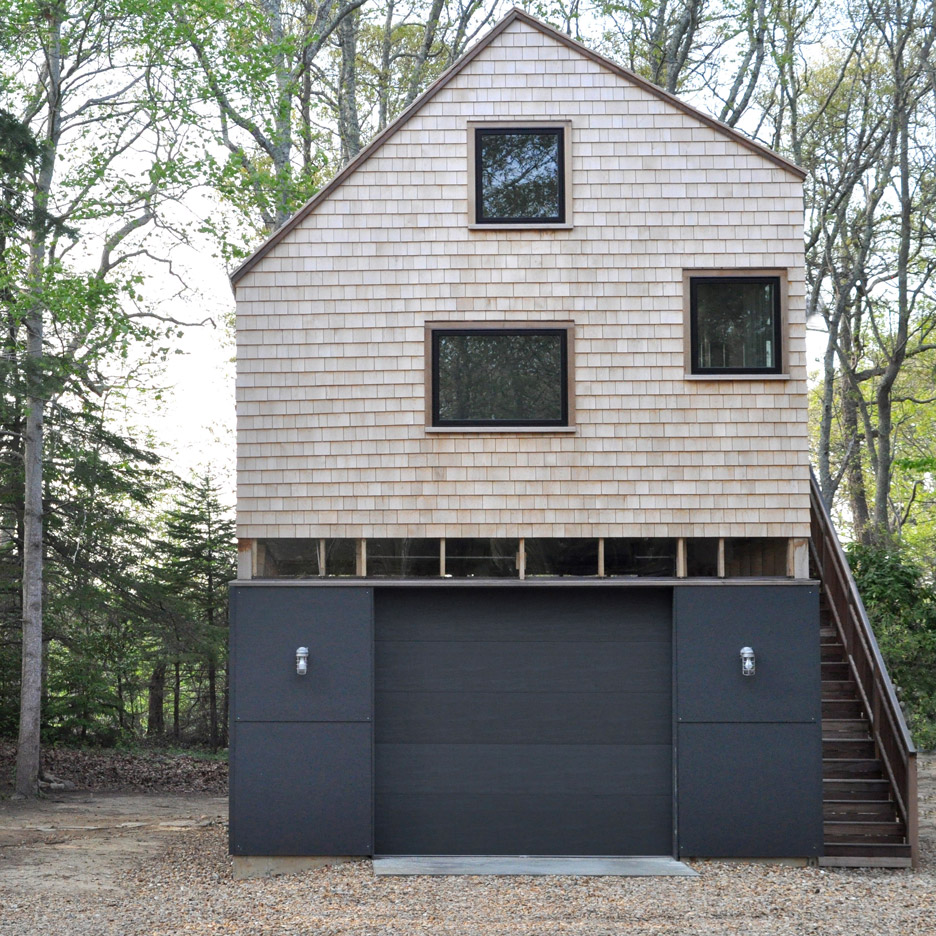 To provide visual contrast, one volume of the home is clad in red western cedar, while the other is sheathed in black pine.

The entry facade is light and transparent, with floor-to-ceiling glazing on all three floors, while the rear elevation is dark and opaque.

"The house opens itself to daylight and to the majestic scenery, thanks to the large glass facade," the team said, adding that the overall form and materials "make the house unite with nature".

Inside, an open floor plan is meant to provide fluidity and a connection with the outdoors.

The ground level contains a living, dining and kitchen area. A black staircase leads to the first storey, where the sleeping quarters are located. A strip of glass in the floor provides a view of the ground level below.

The top floor connects with an outdoor terrace that serves as a "wildlife observation tower and a panoramic belvedere".

Throughout the interior, the team incorporated modern decor and a mix of light- and dark-coloured woods. Large windows framed in black offer views of the nearby lake and surrounding mountains.

Other homes in Canada include a Quebec holiday home with a living room contained inside a cantilevering glass box and a cabin with dark metal cladding and pointy roofs that "seems to emerge from a children's story".