This prefabricated timber sports hall has a shed-like appearance that references the form and materiality of vernacular agricultural buildings in the Upper Bavaria region of Germany.

Architect Florian Fischer and engineer Harald Fuchshuber were commissioned to create the building by local sports club SV Haiming, which had previously been using a much smaller school hall in the village of Haiming for football and volleyball training.

Situated on the outskirts of the village, the new facility provides a dedicated hall with the required 7.5-metre ceiling clearance.

Given an open brief to interpret the form as they wanted but asked to provide an affordable solution, the design team drew inspiration from the simple construction of agricultural buildings and warehouses.

"On the one hand we tried to respect the context and its history and on the other hand we wanted to fulfil the explicit wish to build the sports hall as cheaply as possible," Fischer told Dezeen.

The requirement to keep costs low led the project team to explore a type of timber construction not typically used for public buildings.

They employed gang-nail trusses, which are formed using toothed metal plates to connect the timber beams. The resulting frames are cheap and straightforward to produce, and are typically used to construct prefabricated industrial buildings.

"With great pleasure but with extreme discipline at the same time, we were searching for possibilities of undermining the standards of a common sports hall," said Fischer.

"Construction-wise, but also on an architectural and formal level, the hall seems to be taken from the catalogue of local timber construction and precast factories."

The extensive use of timber and a pitched roof help Sports Hall Haiming to appear from a distance like one of the many agricultural barns found throughout the region.

On closer inspection, a more refined treatment of the materials and attention to details such as the row of thin diagonal posts supporting the overhanging roof hints at the building's public function.

Inside the sports hall, the architects aimed to create a space "that feels heroic, but also very functional and relaxed". This is achieved by celebrating the structure and ensuring an appropriate quality of light.

The elevation of the construction is particularly evident on the north wall, where translucent polycarbonate panels allow diffused light to enter the space and form an illuminated backdrop for the timber framework.

In some parts of the building, sections of the frame that appear structural are in fact decorative, and are introduced to provide a consistent aesthetic treatment throughout the interior of the hall.

The south wall, for example, features a reinforcing concrete beam supported by thick columns, above which a wooden grid conceals a few steel columns, but is largely structurally redundant.

"On the one hand we tried to create a kind of sacred space, dealing only with structure and light," said Fischer. "But we also tried to avoid the consequences of such a space and atmosphere, so the sports hall is therefore very robust." 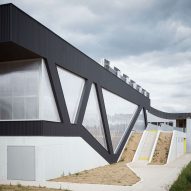