Yūsei Matsui is a manga artist best-known for the Assassination Classroom series. His job means that he spends long hours at a desk, therefore Nendo needed to create something completely tailored to his needs.

The desk includes a partition around one half to give the artist a "secluded space" for drawing, while an opening on the right-hand side creates a 'window' for him to communicate with his nearby assistants.

Storage spaces have been designed especially for the cartoonist's papers and drawing implements, and are laid out to be in easy reach of his left hand.

A set of adjustable shelves can be easily rearranged by sliding them in or out of grooves. Alternatively, they can be replaced by screens to further conceal the workspace.

"This solved the problem of managing a small space which would otherwise be taken up by two monitors on the desk, a requirement for his work and research," said the studio.

Unlike most artists desks, Matsui requested the table be flat as opposed to slanted to better suit his way of working.

Nendo also created magnetic strip lights that can be removed and placed anywhere on the frame, as well as a dust tray that sits underneath the desk to catch eraser shavings.

"This is another solution for Mr Matsui, previously eraser dust pooled under the desk consequently damaging the hydrolysis vulnerable floor," explained the studio.

"While in this project the desk was specifically developed to meet the needs of a professional cartoonist who spends countless hours working laboriously at his desk, it also holds the potential of being used by business people and students."

Nendo – whose founder Oki Sato was recently named the world's most popular designer on the Dezeen Hot List – has continued its typically unrelenting pace of work this year.

Projects have included everything from miniature models of Star Wars figures and a transparent plastic rocking horse, to a set of rolling office partitions designed to aid creativity.The studio also launched its first ever retrospective at Israel's Design Museum Holon. 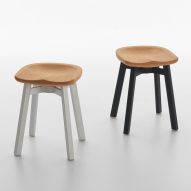