One end of this larch-clad retirement residence in the English countryside by Ström Architects cantilevers over a wall to protect a parking spot for a vintage Aston Martin.

Magnus Ström's Hampshire-based studio designed the house for a couple wanting to retire to a picturesque wooded site near the coastal town of Swanage in Dorset.

The designs first featured on Dezeen three years ago, through a series of hugely popular hyper-realistic renderings by visualiser Henry Goss.

Now complete, the single-storey residence named The Quest replaces a run-down bungalow that had been on the site since 1917.

Stripes of larch cladding and full-height glazing make up the property's facades, framing views from its elevated plot towards surrounding woodland and the nearby Durlston Country Park.

"The clients wanted a house for their retirement, but with a keen interest in design and a love of abstract and modern art, it needed to eschew the usual trappings of staid, retirement home design," said Ström.

Ström Architects is among a number of studios challenging preconceptions of how architecture for older people should be designed.

Inside The Quest, rooms are arranged over one long storey, designed to suit both the future needs of the clients, and their disabled daughter.

A large combined lounge and dining area is placed in the centre of the building, which cantilevers over a stone retaining wall at one side of the sloping site. A sheltered terrace here overlooks the country park.

Ström Architects designs a country house protruding over a wall

The retaining wall, as well as some interior flooring, is made from earth-grey Purbeck stone quarried from the nearby Jurassic Coast.

Steps integrated into this wall lead from the house to the sunken car parking space for the owners' Aston Martin DBS 1968 located below it.

"The large cantilever has been achieved through two concrete planes: the floor and roof acting together like a space beam," explained Ström, who left the concrete exposed on the exterior as a frame for the larch cladding and glazing.

The master suite it located in this cantilevering portion of the building, while a guest suite and study lie on the other side of the lounge to the east.

Pared back interior finishes like the concrete hearth of the broad chimney, engineered timber and stone flooring, and white walls put emphasis on the views.

Ström Architects recently completed another project, a larch-covered holiday home in the Hampshire countryside – which also featured on Dezeen at rendering stage. 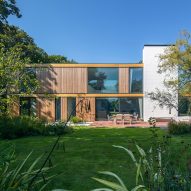 The firm ranked 126 on the Dezeen Hot List, a guide to the most read about architects, designers and institutions of the last year.