Californian start-up Mayfield Robotics has revealed its first domestic robot, which responds to its user with facial expressions, head movements and sounds.

Unveiled at the Consumer Electronics Show (CES) in Las Vegas this week, the Kuri robot is designed to monitor connected products, but to also create a new personality in the home.

Standing 50 centimetres tall and weighing in at six kilograms, the robot features a round head with large eye-like details that open and close, and a stout body that appears to have arms.

The robot has the ability to understand context and surroundings, as well as being able to recognise specific people. When asked a question, it responds with facial expressions and head movements.

"Like many adored robots in popular culture, his personality and ability to connect are his greatest attributes," said Mayfield Robotics.

The voice-controlled robot is equipped with a camera that allows users to check on the house when away, as well as four microphones for voice commands, dual speakers for music playback, and Wi-Fi connectivity.

Sensors enable Kuri to map out its surroundings and learn its way around the house, making sure it doesn't collide with any obstacles or fall down stairs.

"While insanely cute on the outside, Kuri contains serious technologies on the inside that represent the latest developments in smartphones, gaming, and robotics," said Kaijen Hsiao, chief technology officer and co-founder of Mayfield Robotics.

"We hope Kuri introduces people – especially kids – to the power of technology and can inspire a new world of possibilities for their future," she added.

Kuri is currently available for pre-order in the US, priced at $699 (approximately £568). Mayfield is hoping to ship the robots by late 2017. 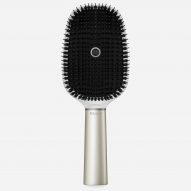 "World's first" smart hairbrush scores quality of hair during use

Kuri is on show at CES from 5 to 8 January 2017. Other products launching at the tech fair include Lego's Boost kit designed to help children learn coding, a smart brush that tracks and scores the quality of hair, and a bike with a frame that softens vibrations.