Cedar shingles, slate and oak were all used to build this rural music centre in Cumbria, England, designed by Newcastle-based studio MawsonKerr for a charity offering musical therapy.

MawsonKerr designed the 600-square-metre building for the Sunbeams Music Trust charity, which offers musical therapy for disabled children and adults.

The Sunbeams Music Centre includes four music therapy rooms, recording studios, an exhibition space to promote the work of the charity and a concert hall for fundraising events, as well administration spaces for the charity.

The architects opted for locally sourced, natural materials wherever possible, to suit the building's rural setting overlooking Ullswater, the second-largest lake in the Lake District. Oak clads the front walls, while slate covers a wall at the rear.

Curved around the site's contours, the centre has a horn-shaped floor plan – described by the architects as a being like a crescendo.

"The building is designed to embody musical qualities of rhythm, timbre and melody within the landscape; shaped along the curved natural contours it grows with a crescendo at the canopy to the eastern main entrance," they said.

This shape creates a large, open entrance area, which is sheltered beneath a wooden canopy.

Main activities are housed in three lozenge-shaped pods that protrude from the front of the building. Clad in cedar shingles and topped by a green roof, the volumes decrease in size along with the width of the building.

The largest volume houses a performance space named the Glassical Hall after the centre's patron, the composer Philip Glass.

Skylights line either side of the roof, while the concave walls are clad in oak panels to optimise the acoustic effect.

A meeting area fronted by glazing occupies the smallest volume, while a pair of musical therapy rooms are housed in the middle pod.

Other activities are slotted in between these pods in the body of the main building, where windows provide views and doors to the garden in front. These openings are carefully sized to limit overheating, but enable natural ventilation and light.

Spaces include an exhibition area topped by a large circular skylight, and two more therapy rooms.

Glue-laminated timber, known as glulam, was used to build used for the main structure.

Manufactured by layering up multiple slices of wood and gluing them together, this engineered wood is significantly stronger than regular wood, allowing for large spans and irregular shapes.

Other sustainable additions include locally sourced sheep-wool insulation and a ground-source heat pump.

A series of custom-designed pieces were also created for the building, including a reception desk made with layers of contoured wood , intended to resemble the music signature of a harp.

Located in northwest England, Cumbria is one of the most sparsely populated counties in the country. Other recent projects there include a stone barn converted into a university library and a contemporary stone and zinc country house. 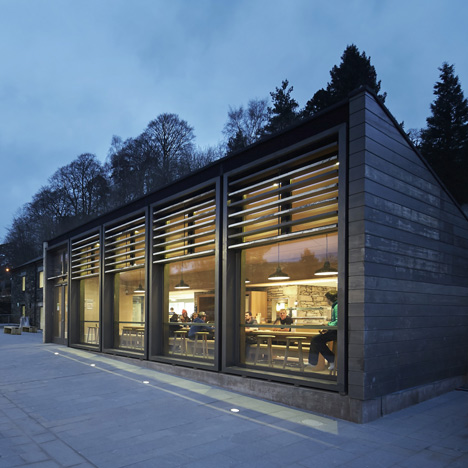