Chairs that sculptor and painter Roman Modzelewski designed in the 1950s are available to purchase for the first time as part of a new collection launched by Polish brand Vzor at IMM Cologne.

Up until now, the chairs in Vzor's Iconic Design collection have only been displayed in museums as prototypes.

The collection launched at this year's IMM Cologne fair, where Danish company Brdr. Krüger also presented a new line of furniture from a 1950s design – the Triiio table collection by architect Hans Bølling.

"Mid-century modern is timeless, it looks up-to-date right now," Vzor's Michal Woch told Dezeen. "Vzor's concept is to identify the historic original projects that have never been manufactured on a larger scale and adapt them to 21st-century needs."

To this end, Vzor has produced three of Modzelewski's prototypes. Influenced by impressionism, Modzelewski experimented with form and colour, and used modern materials.

"Our key designer is Roman Modzelewski because as a sculptor and a painter he would experiment with different materials and he didn't accept the typical limitations," Woch said.

"Only some years ago we were able to make his design an up-to-date product with modern technologies."

Handmade in 1958, the RM58 chair – which features a seat and armrest scooped out of fibreglass – is one of the earliest Polish examples of polyester-glass laminate furniture. Vzor describes its unusual shape as having no counterpart in Poland at the time.

As with the historic version, the chair is made using technologies applied in yacht construction. However, the team has adapted the production process so that it can quickly and easily make large batches of chairs.

Vzor has also made a matt version of the chair in new colours chosen with the patent holder – Modzelewski's widow, Wera Modzelewska – as well as an upholstered version.

The Polish brand has also produced Modzelewski's RM56 Wood chair. Made in plywood bent in two directions, the design was one of the first to explore the plastic properties of the material.

Vzor has slightly altered the original shell of the seat, which Woch says provides a better connection with the metal legs. The brand has also produced Modzelewski's 1956 version of the chair, made from PVC.

The final of Modzelewski's products in the collection is the angular RM57 chair, designed in 1957. Vzor's challenge was to create a comfortable upholstered seat that followed the simple diagonal lines of the original.

"Complete redesign of the seat manufacturing technologies, in particular its internal structure, enabled us to offer a product faithful to the original that at the same time guarantees surprising comfort," said the brand.

Knothe was forced to experiment with wire mesh due to the lack of materials available in Poland at the time. The only prototype of the chair is stored in the National Museum in Warsaw.

IMM Cologne took place from 16 to 22 January 2017. Products launched at the fair include a hybrid bed-desk frame by Pieter Peulen that helps students make the most of tiny living spaces and stools by Fabio Hendry and Martijn Rigters featuring patterns made from burnt hair. 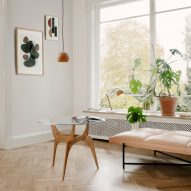