The UK government has made the creative sector a priority in its new industrial strategy, signalling what industry representatives are calling a potentially "new, bold and imaginative understanding of business".

The government identified the creative industries as one of five sectors to come in for special attention in its Industrial Strategy Green Paper, a springboard for discussion of future policy and legislation.

As one of five "world-leading sectors" recognised in the report, creative businesses are invited to approach government with proposals to boost their industries.

Television executive Peter Bazalgette is also tasked with conducting an independent review to identify opportunities for growth throughout the sector.

It marks the first time the creative industries have been formally recognised in a British industrial strategy. Industry bodies the Creative Industries Federation (CIF) and Design Business Association (DBA) welcomed the inclusion.

"This is a radical departure, secured only in the last few months, and is potentially the sign of a new, bold and imaginative understanding of business in the 21st century," said the Creative Industries Federation.

A representative of the DBA also welcomed the report, saying it would send a positive message to the sector.

"This sends a positive message to all those working in the creative industries of the value they add to the economy, and recognises the creative sector's importance to the future growth and prosperity of the UK," the representative said.

The Royal Institute of British Architects (RIBA) declined to comment ahead of its formal submission to the government consultation, which closes in late April.

The creative industries' inclusion in the industrial strategy follows an unprecedented few years of growth that outstripped any other business sector in most of the UK.

While the creative industries are typically defined to include as diverse an array of businesses as film, publishing, advertising, architecture and design, only music and video games are specifically mentioned as examples in the industrial strategy.

Nowhere does the 132-page report refer specifically to architecture or design, making greater reference throughout to STEM (science, technology, engineering and maths) disciplines. 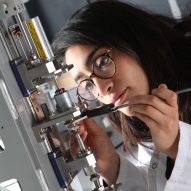 UK culture minister Matt Hancock had previously described the UK's architecture and design industries in a statement to Dezeen as "vitally important to our future as an outward looking, creative nation".

Dezeen's Brexit Design Manifesto, which has been signed by hundreds of leading figures from the architecture and design community, called for the government to recognise the importance of design to the UK economy.

Outside of the creative industries, the other four sectors singled out for government support in the industrial strategy have a narrower scope. They are life sciences, ultra-low emission vehicles, industrial digitalisation and the nuclear industry.

The rest of the strategy outlines a number of focus areas to improve the country's productivity across all industries. This includes measures such as investment in research; upgrading physical, digital and data infrastructure; and supporting new businesses to start and grow.

The DBA said that the strategy's emphasis on research and development would also deliver a positive impact on the design industry. The DBA made a submission to the HM Treasury last year emphasising the value of innovation-related tax credits.

"Enhancing the UK's position as a world leader in innovation will positively influence many design businesses," the DBA told Dezeen.

"After all, designers are the link between innovation and the potential market of customers/consumers. So the government's decision to make the biggest increase in public research and development investment of any Parliament since 1979 and its review of the tax environment for R&D to stimulate private sector investment is a good thing for our industry, because it grows the market for design."

The government is conducting consultations around the green paper and invites responses to be submitted no later than 17 April 2017 using the CitizenSpace online consultation platform.