The CH23 completes the set of four chairs Wegner designed as his first collection for the Danish brand.

The remaining three – the CH22, 24 and 25 – have all either been in constant production or recently rereleased.

After partnering with Carl Hansen & Son in 1949, Werner, then still a young designer at 35, created the four chairs over the course of a few weeks at the brand's factories.

While the CH24, also known as the Wishbone chair, and the CH25, a woven lounge chair, have never been out of production, it is the CH23 dining chair that was the bestseller when first released.

Knud Erik Hansen, the third-generation CEO of Carl Hansen & Son, describes the chair as more traditional than some of the influential Danish designer's other creations, which were seen as radical in their time.

"At that time it probably fitted better into the design of an average home," Hansen told Dezeen. "It was less avant-garde."

"The Wishbone chair was extremely avant-garde, and nobody wanted it. Everybody wrote about it – the papers, the few magazines there were in those days – they wrote very highly of it, but nobody bought it."

However, the Wishbone chair soon found popularity in the US, and it was the CH23 which ended up being pulled from production in the 1960s. Hansen has been working to bring it back for the last two years.

The CH23, manufactured to Wegner's original design, is a simple, armless dining chair, with cruciform cover-cap detailing where the backrest meets the frame. These can be rendered in a contrasting wood to make them stand out more.

The chair's other notable feature is its seat, which is double woven from paper cord in a process that takes an experienced weaver 1.5 hours. Carl Hansen & Son says the resulting seat can last for as long as 50 years before needing to be rewoven.

While originally made from teak, 2017's rerelease is made from the now more sustainable oak or American walnut.

The re-release of the CH23 – nine months after Carl Hansen and Son's reissue of the CH22 lounge chair – means that all of Wegner's original designs for the brand are now available again.

Carl Hansen & Son were not the only brand to bring reissues to the Stockholm Furniture and Lighting Fair, which is on until 11 February 2017. Fellow Danish brand Hay used the occasion to launch chairs and tables designed by Friso Kramer and Wim Rietveld in the late 1950s and used in local schools. 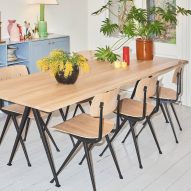