Dezeen teamed up with Danish furniture manufacturer Carl Hansen & Son to host a live talk during 3 Days of Design coinciding with the launch of a collection of heritage pieces designed by Vilhelm Lauritzen.

Titled the Sound of Design, the talk was moderated by Dezeen's founder and editor-in-chief Marcus Fairs and featured Knud Erik Hansen, CEO of Carl Hansen, as well as Anne Møller Sørensen, partner at Vilhelm Lauritzen Architects.

On the occasion of the centenary of Lauritzen's architecture practice, the two companies have collaborated to bring a collection of furniture designs from Lauritzen's archive to market for the first time ever – the VLA26 Vega chair and the Foyer series.

Along with exploring Lauritzen's life, work and impact on Danish design, the panel discussed the collection, as well as the process and environmental benefits of launching heritage designs compared to original designs.

The talk took place at Carl Hansen & Son's Copenhagen showroom as part of this year's instalment of 3 Days of Design, an annual design festival in which showrooms open their doors to visitors and events and exhibitions take place across the city.

Born in 1894, Lauritzen was one of the most important 20th-century architects to come out of Denmark.

Known as a key figure in the inception of Danish modernism, Lauritzen is behind the designs for the first terminal of Copenhagen Airport, the Vega concert hall in Copenhagen and Radiohuset, the former headquarters of the national Danish broadcaster DR.

Designed by Lauritzen in 1956, the Vega concert hall was originally named Folkets Hus (the People's House) and was intended as a meeting place for the labour movement before its renovation to a music venue in 1996.

To accompany the building Lauritzen designed a series of furniture and fixtures which have previously only been found inside the venue, including the stackable VLA26 Vega chair.

"Vilhelm Lauritzen's architecture and design are part of the Danish cultural heritage and perception of functionalism, and we're honoured to be the first to present his VLA26 Vega Chair to a global audience," Hansen said of the collaboration.

The sofa, armchair and bench in the Foyer series were originally designed by Lauritzen in 1945 to furnish Radiohuset's foyer. Previously the pieces have also only ever been available to use inside the building.

"Together with Carl Hansen & Søn, we have worked to adapt the comfort to the present, while still preserving the original design that makes the series timeless," Sørensen said of the partnership.

Now in its 100th year of practice, Vilhelm Lauritzen Architects has designed numerous projects including a renovation of Copenhagen's historic department store Illum and a series of warehouse-inspired housing blocks for Copenhagen's harbour.

Founded in 1908, Carl Hansen & Son is one of the biggest producers of midcentury Danish furniture in the world. 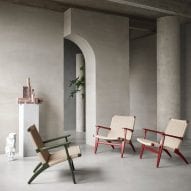 Since the 1950s, Carl Hansen & Son has produced the work of several giants of Danish design including Hans J Wegner, Arne Jacobsen, Kaare Klint, Bodil Kjær, Børge Morgensen and Poul Kjærholm amongst others. The manufacturer has previously launched heritage collections including a recent collaboration with Ilse Crawford to rerelease a series of chairs by Hans J Wegner in earthy colours.

In 2020, it released a collection of minimal lighting products designed by Mads Odgård.

The Sound of Design is part of 3 Days of Design 2022, which takes place from 15 to 17 June 2022. See Dezeen Events Guide for information about other exhibitions, installations and events taking place throughout the week.

This talk was produced by Dezeen for Carl Hansen & Son as part of a partnership. Find out more about Dezeen partnership content here.