The Preludia collection features stackable chairs that can be flat-packed and shipped in large volumes easily, as well as high-top tables and other designs for the office.

The chairs are constructed from a 3D wood-veneer shell, which forms a continuous curved seat and back.

The veneer is formed from several thin layers of timber that are shaped using a mould and steam, creating a three-dimensional form that is designed to be as ergonomic as possible.

According to the brand, the material offers a durable yet softer and more comfortable alternative to plastic or fibreglass, which is often used for office furniture.

"3D veneer is the only material that would enable us to adapt to the human form as thoroughly as we wanted to – while keeping the natural feel of wood that is so important to the Carl Hansen & Son brand," said Ascalon. 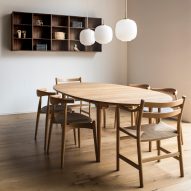 "We looked at every decision through the lens of moving a brand forward while holding on to its history," he added. "The use of wood in the form of 3D veneer offered the opportunity to do both."

The Preludia chair comes in oak, walnut or beech, with options for bare veneer, partially upholstered in a variety of textiles or leathers, or fully upholstered.

Another version of the chair has a similar veneer shell, but available with a base of chrome, black or white powder-coated steel.

When designing the chair for the office series, Ascalon referenced the curved designs of Carl Hansen's iconic mid-century chairs, like Hans J Wegner's Wishbone Chair. "I have kept that on my desk ever since, as continued inspiration for this project," he said.

"I have always viewed mid-century modernism as an ideal for good design, and have always been curious about how these designers worked, how they used their materials, what they questioned, and how they found their answers," the designer added.

Also part of the collection are a rectangular table, a rounded dining table and a high-top rectangular bar table. All of these are made of solid oak or walnut with various finishes.

The tabletops come in black or white laminate with cast aluminium corner joints, which contrast with the wooden base.

The Preludia series debuted at the Carl Hansen & Son's showroom in New York City during the NYCxDesign festival, which took place 11-23 May 2018, and will be available from October 2018.

Carl Hansen & Son is known for its modernist furniture and produces a wide range of items by Danish designers from the 1950s and 1960s, and continues to farm its archives for products. In 2017, the brand reissued both Poul Kjærholm's PK1 dining chair and the final chair from Wegner's four-piece CH23 collection.