The 2,000-year-old amphitheatre in Verona, Italy, could be transformed into an indoor stadium with this competition-winning proposal by German firms GMP and SBP.

Architecture office GMP and engineering firm SBP won an international contest seeking ideas for a roof over the Roman arena, which was built in the first century but is still in use today as a major opera venue.

Their vision is for a seashell-inspired structure that folds back, allowing the venue to be either completely sheltered or fully exposed to the sky.

"The competition brief was to design a retractable and reversible roof structure which on the one hand makes it possible to use the arena during bad weather and protects it against adverse environmental effects, and on the other hand respects the historic monument as best possible and interferes as little as possible with the structure and appearance of the amphitheatre," said GMP.

The winning design was selected ahead of 80 other concepts. It comprises a large elliptical ring, elevated above the arena's walls, which would hold the retractable canopy structure.

Winches would be used to move cables out, which would then be given tension by hydraulics. The canopy would then be extended outwards by the winches, "in the shape of a star".

This configuration of a retraction mechanism is "completely unique and has never been built before", according to GMP, although it claims there are similarities to national stadiums in Warsaw and Bucharest.

"From a bird’s eye view, the closed roof appears like a protective scallop shell that gently covers the historic building," said the firm.

GMP and SBP have previously worked together on a variety of other stadium projects, including the Moses Mabhida Stadium in South Africa, the Bao'an Stadium in Shenzhen and the Shanghai Oriental Sports Centre.

Verona Arena – known locally as Arena di Verona – was built for 30,000 spectators, although security today only allows 15,000. The building fell into ruin after the fall of the Roman Empire, but was reopened during the Renaissance. 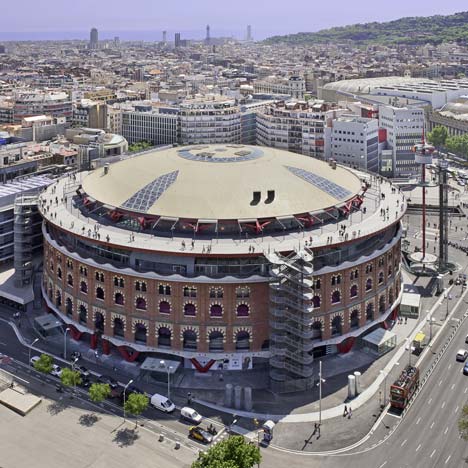