In this movie Dezeen produced for Caesarstone, New York designer Todd Bracher explains why he chose to merge multiple rooms into one for his Das Haus installation at IMM Cologne 2017.

IMM Cologne's annual Das Haus installation tasks a designer with presenting their vision for a modern living space each year.

Bracher's concept for 2017 was to imagine what a home would look like if architects and designers were not limited by the architecture of traditional western houses, in which rooms are designated for specific functions.

"The idea was to find a way to shed away the architecture that we're normally exposed to and to go back to the essentials of what it is to live in the home," he explains in the movie, which was filmed at the furniture fair last month.

Bracher's installation consisted of three zones, including a darkened room for rest, relaxation and meditation, and an outdoor alcove with a shower for washing. 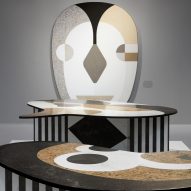 Bracher combined all the other functions of the home into a central space that he calls the "sustenance room", which featured a huge counter in the centre made from a quartz surface by Caesarstone.

"If you look how the home has evolved over the past 30 years, there's this evolution towards a kind of open-plan life, but we haven't really scratched through it," Bracher explains.

"We're dependent on living from what the architecture provides us with. So this project is the next generation – literally to merge multiple rooms into one."

Bracher used a simple material palette throughout his installation, which comprised a Douglas fir frame wrapped with a skin of semi-sheer pink fabric.

He selected a Caesarstone product called Sleek Concrete for the table to complement these other materials.

"It's familiar, but it's also not traditional, and finding that balance for me was really important to help ground the space."

For Bracher, the central table is where he envisages all the daily activities in the home taking place.

"It's effectively a single point where we bring everybody together," he says.

"Folks could be cooking, they could be assembling, creating, destroying, learning, telling stories, sharing. It's about combining multiple aspects of sustaining your body, sustaining your mind and your spirit."