Gravity-defying megastructures are inserted into landscapes in illustrations by Ukranian architect Mykhailo Ponomarenko, who claimed first place in a competition to create an architectural fairytale.

Ponomarenko was announced as the winner of the Fairy Tales 2017 competition during a ceremony at Washington DC's National Building Museum earlier this week.

Now in its fourth year, the competition is organised by the museum, the American Institute of Architecture Students (AIAS) and New York architecture platform Blank Space.

Entrants submit a series of images to support a short story, based on an architectural theme.

"The proposals put forth in the Fairy Tales competition create entire worlds of the imagination – they build their immersive stories as much by what they don't say, as by what they do," said the organisers.

First prize was given to Ponomarenko for his story Last Day, which describes a cylindrical town and floating-ring farms created after the discovery of the Great Gravity Anomaly in Russia.

Carved into a mountain and circling hilltops, these sci-fi infrastructures work in harmony with nature. They are depicted in Ponomarenko's images as elements within classical landscape paintings.

"Landscapes have always inspired me to put something weird, unreal and out of human scale into them," he said, "something not feasible and not practical that contrasts with the natural surroundings, but also exists at the same scale."

"These satirical interventions lead to new ideas and feelings about nature – they make the viewer more aware about the environment and our harmful impact on it," Ponomarenko added.

Second place in the competition was awarded to Chicago architect Terrence Hector. His entry, City Walkers, tells a story of a sentient species of architecture that moves slower than humans can perceive.

"The city in this story was an exploration of civilisation and urbanism as humanity's relationship with natural and biological systems that exist on a vastly longer timescale than the human lifespan," said Hector.

"Creating a closer relationship time-wise between human and natural timeframes let me derive a new urban typology, which also acts as a parable of overexploitation."

French duo Ariane Merle d'Aubigné and Jean Maleyrat's tale Up Above came in third. In their story, refugees have created shanty towns in the sky, building homes on tall thin stilts to escape oppression and regulations on the ground.

"Migration, the accumulation of wealth, overpopulation, the terrorist threat and pollution are some of the issues with which we live every day," said the pair. "We highlighted these concerns and our love of art through this poetic tale."

The AIAS Prize for the highest-scoring entry from an AIAS member was awarded to Maria Syed and Adriana Davis, who met while studying in New Jersey.

Their Memphis-influenced architectural drawings of a modest dwelling provide the setting for a narrative in which each room causes its occupant to behave differently.

"Playing House embodies the idea that architecture can eclipse the personality of its occupants, where the character and style of the architecture dictate the mood of the inhabitants," they said.

"The loud textures and discordant angles of the home sparked the idea for the story: transitioning from room to room manifests itself in drastic physical and psychological change."

The Jury also awarded 10 honourable mentions, which can be found along with the full stories by the winners on Blank Space's website.

Last year's Fairy Tales competition was won by Seattle firm Olson Kundig, for a story about a dead architect who is resurrected and dropped into a futuristic urban landscape, while Alice in Wonderland became the backdrop for a dystopian world filled with fantastical structures in the 2014 winning entry. 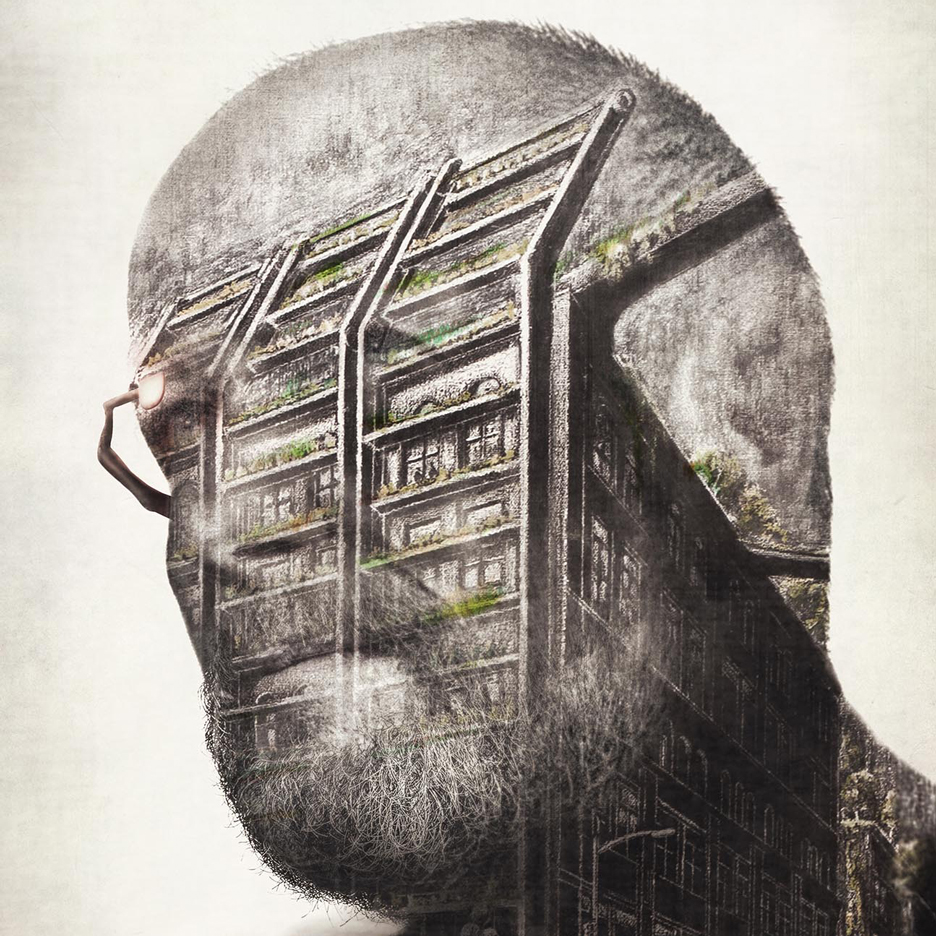 They were on the edge, facing the gorgeous mountain view and majestic ring of the Saturn A6, hovering around one of the pinnacles.

Saturn A6 was a huge artificial platform, which used anti-gravity engines to fool the laws of nature and to prove to the creator of the universe that we can control the game. In places, where it was hard to make a living because of a lack of flat surfaces and picturesque landscapes, Saturn technology brought a new range of emotions and experiences to its citizens. Saturn A6 was an agricultural platform. The people were extremely happy to work in their "fields of opportunities", and, at the same time, contemplate the stunning views around them.

Martina and Sefora were visiting Martina's grandfather, who had a potato field in Sector 3. Life was good on the farm, but at times the people would lose access to satellite signals, interrupting their internet and other network connections for weeks at a time in some cases.

Since it was agricultural platform, nobody rushed right away to fix it, like they would do with at the resort platform, for instance.

Anyway, it was one of those interrupted weeks and the girls went to the stationary phone on the opposite mountain. Sefora wanted to call her "mami" and a couple of friends to share her experiences on Saturn A6, and to vent a bit about the "hijos de putas" on the maintenance crew. While she was on a call, Marti tried to catch the signal. Who knows, maybe she can check her Facebook from here, but Fate wanted them to stay tuned with reality during that week.

After cities were built all over the land and the oceans, the only place to move was the sky – and we conquered it. Now we thrive and are in a harmony with nature. We opened ourselves to its beauty and we embraced it – we live above it and we live with it. Saturns were all over the world now. Totally safe and clean, they provide us with fantastic views which make us conscious about surrounding world. They changed our collective mindset, and led us to rethink our place in the world and our impact on it. Any person who worked on flat land, a farmer for instance, now was capable to keep working on their land – suddenly you could better the feel scale of the sky and the depth of space. In addition, people grew accustomed to the higher altitudes, helping them grow more stamina and richer imaginations for future generations. Most of us had way too narrow of a world view. With Saturns, we started suddenly seeing the bigger picture. This helped us become more aware of our impacts on Earth's landscapes and ecologies.

Saturn technology was introduced to the world in Vnutrigorsk (Внутригорск in Russian, meaning "inside the mountain"). This first occurred in the USSR in 1967, and was discovered by pure accident. Nikodim, a shepherd on the mountains in the Altai region, noticed a missing member of his flock. Martha, one of his most precious sheep, was nowhere to be found. After a brief search, Nikodim found Martha in a crack in the mountain's surface. Bent on protecting his flock, Nikodim went into the crevice after her.

After a while of exploring the flesh of the mountain, Nikodim finally found himself and Martha inside a huge cave on the opposite side of the mountain's surface. The laws of physics did not work in a conventional way here, but he didn't notice out of fear and a shroud of darkness. He later reported the mysterious cave to the Village Council, who sent geologists to investigate. This is how the Great Gravity Anomaly – GGA, was discovered.

After discovering the GGA, the area become overpopulated with all types of people, intellectuals and undesirables alike, including scientists, laborers, and military. The GGA was such an extravaganza, they decided to build a scientific research institution and a new town to accommodate all the people. That's how Vnutrigorsk was established.

Research on the GGA conducted in Vnutrigorsk helped the scientists develop an anti-gravity engine. These findings led to the building of the first Saturn. They were called "Saturns" because of the rings, platforms hovering around the mountaintops, resemblance to the planet.

My father had heard rumors about a "weird town in the mountains" and the first Saturn being built. So, in summer 1978, he and a friend went to see it. A day-long trek to the mountains in the Altai region would lead them to Vnutrigorsk. When they arrived in the region, on their way through the mountains they saw a very picturesque road. From a distance it looked like a DNA strand and spiraled above and through the mountains. This spiral thrilled them for 15 kilometers and in the end got them down into the valley. Dad concluded that it was some sort of symbolic entrance to Vnutrigorsk – and then they saw the town. It was unbelievable. A huge cylindrical hole was made in the mountain and the town was wrapped on the inner side of it. Apparently, there is zero gravity in the center, because on the poles there were two big research facilities, and on the sides were typical Soviet residential areas, so the guys went to explore it.

It was a small Soviet town with straight rows of five-story houses, typically among the people called "Khrushchevka", with lush yards in between them. I grew up in similar house and yard on other side of the country, so I got the feeling of "urban design" instantly. Also there was a school and a kindergarten. All other necessities were provided within the research facility.

When you were standing there in one of the yards, you could look up and see people on the opposite side! It was remarkable! Kids there had very peculiar games, all related to throwing stuff from one yard to another on the opposite one above you, without hitting the research towers. Some people would use slingshots.

On every house entrance there were seniors, mostly grannies, sitting and talking. My dad noticed they were discussing them, probably because they looked like tourists. One boy came up and asked where they had come from. Dad said who they were and what they were doing. The boy seemed excited, and after an exchange of a chocolate bar and a charcoal black pencil, the boy guided them to the roof of one of the houses. The view was absolutely surreal. Mountains and valley were tilted 90 degrees. Around one of the pinnacles they saw a Saturn – the very first one! The scale was enormous, but at the same time it was harmonious with the surrounding landscape – it was the whole town looped in a circle. Its horizontal line contrasted with the verticality of the mountain. It was serene, high and absolutely inaccessible from land.

My dad and his friend saw numerous objects flying around it, probably carriers of people and goods. While looking at Saturn and Vnutrigorsk from the roof, the boy offered to them to throw a piece of a brick to the opposite side where some bullies lived. Dad laughed, but refused.

At the end of the day they started the drive back. Mountains, Vnutrigorsk, Saturn and the "DNA" highway were way behind them. Coming around the last corner of the highway, they were floored to see two more rings hovering over the flat fields. Dad never saw Saturn that close. On top of it were Khrushchevkas again, and lush greenery in between, and big institutions and light poles, all covered with the warm light of the setting sun. They came to a stop under the center of one of the rings. They felt like they had saw the future. It was as if the whole city could fit it in your hand, and it could. It was the end of an era for my dad, but he knew that tomorrow a new one would begin, holding untold opportunities. Silently the rings hovered in the sky – waiting.