Located on the top floor of the 19th-century Parisian station, Softroom's Business Premier lounge aims to cater to Eurostar's growing business-class clientele, who the brand said is choosing high-speed rail over plane.

To create a comfortable environment for both business and leisure travellers, the studio based the design on a Parisian apartment rather than departure lounge.

The space, which has high ceilings, is kitted out with white marble fireplaces, a cocktail bar, dining area and soft seating areas that face onto the main station concourse below.

"Set in the top floor of the station, we've reimagined the striking architecture of the original building, and created a series of different spaces to suit all occasions," he continued. "From the light-filled working area to the relaxing cocktail bar, the lounge offers a flexible environment to suit all needs."

Maroon velvet chairs are stationed around the edge of a circular black and gold bar at the back of the space. Here, travellers can indulge in a drinks menu developed for Eurostar by the London Cocktail Club.

Michelin star chef and Eurostar culinary director Raymond Blanc has devised a food menu especially for the space. It offers a range of dishes aiming to fuse British and French cuisines as well as a bespoke tea blend designed for the lounge by Britain's only tea producer, Tregothnan.

The walls are hung with contemporary French artworks that are curated by the Hospital Club in London and available to purchase.

"With its elegant design, calm environment and digital connectivity, the lounge will provide an unrivalled level of style and comfort for our business customers," said Eurostar chief executive Nicolas Petrovic.

Plug sockets, Wi-Fi and wireless chargers cater to those working while awaiting their train. Sofas and armchairs in a variety of upholstery styles are grouped in living-room-like clusters around the bar.

London studio Softroom, founded in 1995 by Bagot with Oliver Salway, designed the lounge as part of a wider redevelopment of Eurostar stations and services.

But the redesign was remarkably unpopular with influential names in the fashion industry using the trains to travel to and from Paris, with journalists from Vanity Fair, Vogue and Wallpaper* criticising its interiors. 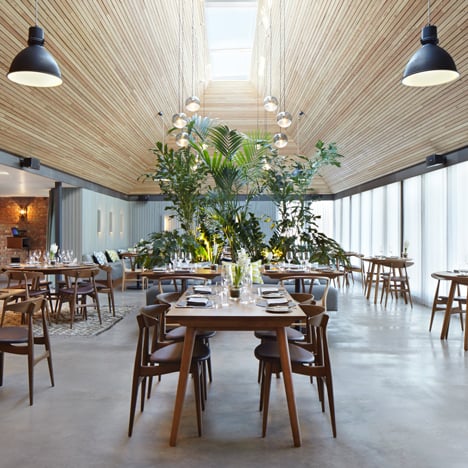 Eurostar – which covers routes between major European cities including London, Paris and Brussels – had appointed Christopher Jenner as creative director to oversee the overhaul of its services, but the South African designer left his position in late 2015 after less than two years in the role.

Among Softroom's past projects is the conversion of a 19th-century pub into a culinary school, bar and restaurant, and the renovation of a restaurant into the British Museum's Great Court.

Photography is by Jack Hobhouse