Goodyear has updated its spherical tyres for self-driving cars, adding a "bionic skin" of sensors that reads the road and adapts to suit different terrains.

The Eagle 360 Urban concept tyres were unveiled at this year's Geneva Motor Show, and build on a design released by Goodyear the previous year.

Designed to be used with self-driving vehicles, the 3D-printed spherical tyre uses artificial intelligence to adapt automatically to its environment.

Its surface is covered in what Goodyear describes as a "bionic skin" of sensors, which are able to sense driving conditions before feeding it back to the AI system.

Made of super-elastic polymer, the skin is able to expand and contract. Its outer layer covers a foam-like material that is strong enough to remain flexible, despite the weight of a vehicle.

Based on the information gathered, such as weather and terrain, the system would transform the tyre so that it suits the surrounding conditions.

Components beneath the surface would reshape the individual sections of the tyre's tread design, adding dimples for wet conditions or smoothing the tread for dry conditions. Goodyear likens these components to human muscle.

The Eagle 360 Urban tyre could then share its information, chosen course of action and its success with other vehicles.

The smart tyre also has the ability to automatically repair itself. Should the so-called bionic skin become damaged, the sensors in the tyre can locate the puncture. 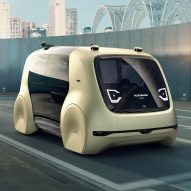 The tyre would then rotate to create a different contact patch, and a "self-healing" process begins, with materials that are specifically designed to be able to flow towards the puncture.

The American company believes the sphere-shaped tyres could make driverless cars safer and smoother to run.

"A revolution will take place at the intersection of autonomy, mobility and connectivity," said Jean-Claude Kihn, president of Goodyear Europe, Middle East and Africa. "As this unfolds, tyre technology will be even more important than it is today."

"To safely navigate their surroundings, the autonomous vehicles of the future will need to learn to cope with the millions of possible unknowns we face in everyday driving scenarios. To do so they will need access to data and the ability to learn and adapt."

This year's Geneva Motor Show takes place from 9 to 19 March. Other news from the event includes Volkswagen's friendly new shape for cars of the future and Airbus' concept for a flying car.