Global design consultancy IDEO has created a concept for a four-pod self-driving car that could be shared by everyone in the neighbourhood.

The concept was created as part of the consultancy's The Future of Moving Together research, which imagines what the future of commuting might hold. A video by IDEO shows a self-driving car that could be hailed – like an Uber – by passengers on their way to work.

A screen on the front of the vehicle greets riders, and lets them know their seat is ready. Doors slide out to reveal four individual aeroplane-style seats, one of which would swivel round to welcome the passenger.

A personal screen allows the rider to make video calls, shows a countdown to arrival, and even gives some recommendations for meditative breathing.

Commuters who prefer their quiet time could set their pods to private mode, and noise-cancelling technology would keep single seats quiet enough for short naps. Acoustic amplification would mean neighbouring seats could still chat without disturbing those around them.

Motors and batteries would be housed beneath the car, leaving room for extra storage space in the front – which could potentially slide in and out like drawers, and contain cooled space for groceries.

IDEO suggests that car renters could also receive discounts, and contribute to more economical and ecological deliveries, by offering to pick up neighbours' groceries on their way home.

Designers, trend forecasters and car manufacturers are all considering new models of car use that might be ushered in by current trends in autonomous and electric technology. Chinese automaker Geely is releasing a car built for sharing, with digital locks and an open platform.

Driverless technology is already appearing on roads. Google's spin-off Waymo has revealed its first self-driving car – a Chrysler minivan that it expects to launch this year – and Uber is experimenting with driverless taxis.

In fact, the barriers to autonomous vehicles may now be more psychological than technological. BMW board director Peter Schwarzenbauer recently told Dezeen that the company is working with psychologists to design self-driving cars that "build up a relationship" with their occupants, reassuring them that they are safe. 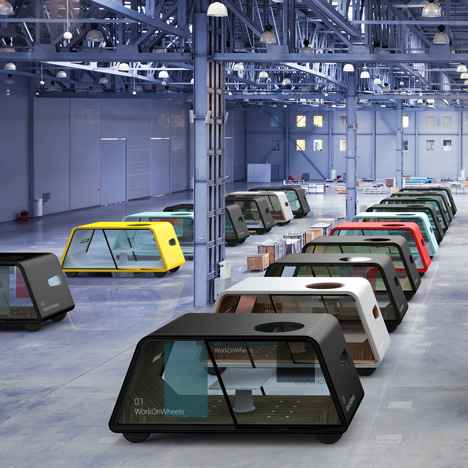 IDEO envisions a future where self-driving workplaces commute to you