At this year's SXSW festival, an Austin-based startup has launched sales for its prefabricated tiny house equipped with systems controlled by a mobile app.

The micro-housing startup called Kasita – adapted from the Spanish word for "small house" – was launched by a professor-turned-entrepreneur who once lived in a dumpster.

The company unveiled a tiny house prototype in 2015 and, after making various modifications, is now selling the units for $139,000 (£114,200). Discounts are available to customers who purchase multiple units.

The mobile home – which encompasses 352 square feet (33 square metres) – is being shown this week at the South by Southwest (SXSW) conference in Austin.

"Kasita is on a mission to solve the housing crisis in America with our seamlessly smart, beautifully designed light homes," the team said. "We have taken a product design approach to housing in a way never before imagined."

The company is targeting a range of customers, including "urban millienials, upwardly mobile singles, the shrinking middle class, and retirees".

Designed by the company's in-house team, the rectilinear dwelling has a steel structural framework and is clad in aluminium composite panels. Windows are made of glass that tints automatically or on demand.

The split-level interior contains a glass-walled lounge area, a living room that doubles as a bedroom, a full kitchen, and a bathroom with a shower. Clerestories and 10-foot-high ceilings (three metres) help the space feel bright and airy.

The dwelling is larger than Kasita's initial prototype, which totalled 319 square feet (30 square metres). "The layout has changed and we’re constantly improving based on user feedback," the team said.

Many of the home's systems and devices are controlled by a mobile app, including lights, window shading devices, an entertainment system, thermostats, smoke detectors and a video "doorbell".

The smart home also comes equipped with Amazon Echo Dot, a hands-free device that enables users to control systems with their voice.

"We're providing a completely integrated home automation experience," the team said. "Kasita is easy and integrated on day one."

In the future, the company – which has grown from three employees to 22 in the past year – hopes to expand the concept and attract urban developers. Its vision is to create stackable units that can be slotted into a giant framework.

"Our first units fit in many untraditional spots — backyards, rooftops, a desert getaway," the team said. "Our next models will be stackable and designed as high-density solutions for urban environments."

Kasita was founded by Jeff Wilson, a former environmental studies professor at Huston-Tillotson University in Austin. Wilson spent several years working for IBM in California in the last 1990s, during the dot-com boom.

For a year, from 2014 to 2015, Wilson lived in a modified trash dumpster in Austin, which led him to start Kasita. Called The Dumpster Project, the experiment was meant to explore sustainable practises and new ways of living.

Other tiny houses include micro cabins designed by Harvard students for stressed-out city dwellers and a prefabricated dwelling by Avava Systems with components that are shipped in flat-pack boxes. 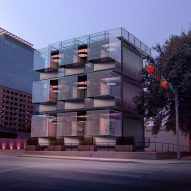