This week's roundup from Pinterest features industrial-style loft apartments and warehouse conversions that take design inspiration from their past lives as factories or barns.

This east London warehouse conversion by Sadie Snelson Architects functions as a studio and home for a photographer, and features a mezzanine, concrete work surfaces and original Crittal windows.

Find out more about Clapton Warehouse ›

Renovation of an apartment in Barcelona, Spain, by Carles Enrich

An old laundry space in Barcelona has been converted into an apartment with clever storage by Carles Enrich, who left black I-beams and vaulted ceilings exposed to reference the building's industrial past.

Find out more about Renovation of an apartment in Barcelona ›

Houben & Van Mierlo Architecten paired black steel columns with exposed venting to reference the original features of a pair of former barns in Amsterdam, which have been stripped back to their shells.

Warner House, UK, by Inside Out Architecture

Structural elements such as concrete ceiling beams and columns have been exposed during the renovation of this central London apartment by local studio Inside Out Architecture.

Find out more about Warner House ›

An old industrial building in Brussels has been converted into an open-plan apartment by ADN Architectures, who added a skinny staircase made from folded steel but left concrete ceilings and columns exposed.

Find out more about Loft in Brussels ›

This converted loft in Tokyo has been left looking deliberately rough around the edges by G Studio, who decided to combine home comforts with raw industrial finishes, and dabbed the concrete walls with white paint.

Find out more about Tokyo Loft ›

This derelict block in Mexico City has been transformed into a series of apartments by Cadaval Sola Morales, who chose to restore the original wooden floorboards and leave brick walls with plaster marks exposed.

Find out more about CH-Reurbano ›

Load-bearing walls were replaced with wooden beams in the renovation of this early-20th-century apartment in Montreal, which features a monochrome colour scheme and painted brickwork.

Find out more about Espace Panet ›

Andrew Simpson Architects inserted a series of skylights in between original ceiling trusses to draw light into this red brick former warehouse in Melbourne.

Find out more about Water Factory ›

A workshop building was overhauled into this loft-inspired home for a Dutch couple by EVA, featuring double-height spaces and a black steel staircase.

Find out more about Loft Sixty-Four › 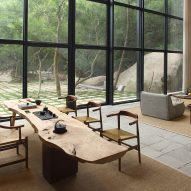