Architecture studio Adept has completed an industrial-style building for the Aarhus School of Architecture in Denmark, with workshop facilities for students and the local community.

Called New Aarch, the new Aarhus School of Architecture building consolidates the facilities of its 10 previous locations into a single space on the site of a former railyard.

Adept oversaw the construction of the facility, after being part of the team behind the competition-winning design. This team was led by fellow architecture studio Vargo Nielsen Palle and also included Rolvung og Brøndsted Arkitekter.

The building was envisioned as a place for making and experimentation, rather than a formal institution.

Many facilities are open to the surrounding neighbourhood. This creates opportunities for cross-pollination between students and their neighbours, who include Institut for X, a self-build incubator for creatives and start-ups.

"The dream was a robust structure, a living laboratory of architecture," said Adept partner Martin Krogh.

"The design allows interior and exterior spaces to blend, not only through literal transparency, but also by questioning what is the school's space and what is the city's."

"This means that both the surrounding urban environment and the curricular activities will shape the building in the future," he continued.

"It is a building that was designed to never be enough in itself – only through its occupants is it complete."

The 12,500-square-metre New Aarch building is organised over four storeys that gradually step down from the northwest to the southeast end of the site.

Ground-floor spaces have ceiling heights of around six metres. There are also various double-height spaces in the building, creating scope for flexible use.

Materials both inside and out were chosen with robustness and sustainability in mind. 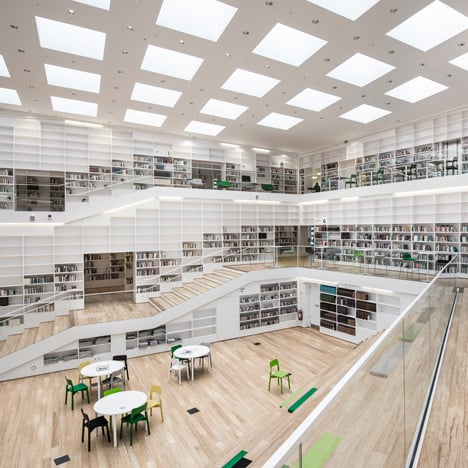 Inside, floors are made from wooden offcuts from a window manufacturer, while the timber-framed library – a built-in piece designed by Praksis Arkitekter – was constructed using a repurposed shelving system from another building nearby.

The result is a structure that feels highly utilitarian, with all service ducts and vents left exposed.

"If you want to a space that can be used, the key is not to polish it and make it shiny," said Adept partner Simon Poulsen.

"We wanted to continue this industrial character and really emphasise the fact that it's a factory for architecture," Poulsen told Dezeen.

"The whole building, both inside and outside, is made without trying to cover things like ventilation tubes. Everything is exposed and very visible, like the in-situ cast concrete."

In use since late 2021, the building provides space for approximately 100 staff and 600 students.

The ground floor accommodates the workshops and library, with many spaces open and accessible to the public. Upper levels provide studios, administrative offices, teaching rooms and research labs.

Poulsen said the layout was planned with the future of the building in mind. Its design includes the option of a 2,500-square-metre extension.

"Nobody knows what the needs of this school will be in 10 or 20 years, so providing a huge amount of open flexible space that can be used in different ways was key," he added.

New Aarch was longlisted for Dezeen Awards 2022 in the civic building category.

Other projects in the show explore topics including rewilding and co-living.