The London and Ghent studio worked together to design the facility for social services provider OCMW Aarschot, after jointly winning an international competition.

The project consists of a social centre and 36 serviced apartments, built on a historically important site on the line of an old city wall and at the end of a market street.

Part of a larger masterplan developed by Ghent firm Robbrecht en Daem for the regeneration of the city centre, the Orleanshof complex seeks to maintain a connection with the site's history and its urban context.

"Making reference to the memory of the wall and responding to its domestically scaled neighbours within the historic centre, the building is composed of three long, thin, pitched-roof bars of accommodation that step up the sloping terrain of the site," said the architects.

A courtyard set back from the road creates a continuation of the market street opposite, helping to draw people towards the entrance.

The clean-lined gabled forms of the three distinct volumes and a separate townhouse offer a contemporary interpretation of the city's historic architecture.

A simple material palette underpinned by the pale brick cladding allows the building to slot unobtrusively into its surroundings.

In addition to ensuring a sense of connection with the city, the architects also sought to promote interaction between inhabitants and avoid the "introverted, institutional architecture" of standard elderly housing projects.

Courtyards with varying proportions help to organise the internal spaces. They also encourage residents to mingle, by affording views of different activities from throughout the public and private areas.

The large courtyard at the building's entrance is flanked on ground-floor level by a reception area, as well as the social centre's cafe and multipurpose rooms.

The apartments on the upper floors are arranged in threes around smaller communal areas, some indoors and some outdoors.

Daylight floods into these spaces through voids or skylights. It then filters into the interiors of the homes through the kitchen windows, which are aligned so neighbours can see each other across the internal corridors.

Brightly coloured shutters can be closed if privacy is required.

Several of the residences on the first floor open onto garden courtyards that are also overlooked by the apartments on the levels above.

Each apartment has a fully equipped kitchen, living room, bathroom, one or two bedrooms and a terrace. Simple materials and minimal detailing lends them a bright and neutral feel.

The communal spaces and corridors feature a more utilitarian palette, with exposed breeze blocks suggesting a transition between internal and external space.

DRDH Architects was founded by Daniel Rosbottom and David Howarth in 2000. The studio ranked at number 332 in the inaugural Dezeen Hot List – a countdown of the year's hottest names in architecture and design.

Previous projects by the firm include a white concrete cultural centre in a Norwegian city's harbour. The studio also made the shortlist for a new extension to an Oxford University college, but lost out to fellow London office Gort Scott. 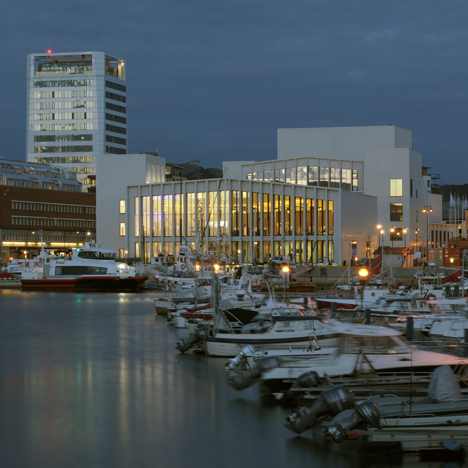