Tokyo-based Arii Irie Architects has added a series of corrugated-metal blocks to a 1980s house in central Japan, and used wooden beams and angular windows to prop up their mono-pitched roofs.

Arii Irie Architects were tasked by a middle-aged couple to design a new house next to their current residence, which was built in 1983. The clients decided to keep their old house as an extra space for their children and grandchildren to stay during holidays.

The aim was to create continuity between the two buildings, as well as make the most of the temperate climate of Hamamatsu, a city on the southern coast of central Japan.

The architects interpreted the existing mono-pitched home as four new volumes topped with large tilted roofs. They slope and overhang on the southern side to block strong sunlight, but lift upwards on the northern side to open the interiors to plenty of natural light.

"They wanted a house which would normally be used just for themselves and at times used in combination with the existing one, for their whole family," the architects told Dezeen.

"The group of roofs of the new volumes relate to that of the existing house, creating a sense of continuation between old and new," said the architects, who named the project House with Gardens and Roofs.

"Our aim was to create a whole, old and new altogether rather than emphasising the contrast between the two".

The roofs are elevated above the corrugated walls by wooden beams and glazing fitted beneath to create a clerestory window that brings natural light into the interior.

"The roof is lifted up from the beams, making the indoor somewhat like covered outdoor space," said the studio. "The project is an attempt to seek new relationships between indoor and outdoor, old and new."

A sand garden is placed in between the master bedroom and the open-plan kitchen and dining room, which also opens to a decked terrace, while the existing house and a music room block are separated by a grass-covered garden.

The architects chose corrugated steel for the walls to help the blocks blend in with the surrounding cityscape, while the wooden construction is intended to reference the traditional building style typical of houses in Japan.

It is also perhaps a nod to the dilapidated timber house, which constructed in the early 1900s, that formerly occupied the site and was owned by one of the client's parents.

Inside, the residence wooden beams, studs and roof all remain exposed. The walls and furniture units are made from oil-painted plywood, while the ceiling is lined with white-painted gypsum boards.

Other houses in Japan include a residence in a forest featuring secluded courtyards that frame views of trees and sky and a stripped-back holiday chalet at the base of a dormant volcano. 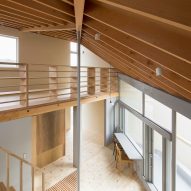 Photography is by Daichi Ano.