Philipp Thonet explains how furniture manufacturer Thonet collaborated with flooring brand Bolon to create an updated version of its classic 209 bentwood chair in the next video in our Bolon at Heart series.

Thonet, which was founded by Philipp Thonet's great, great grandfather Michael Thonet in 1819, first produced the 209 chair at the turn of the 20th century.

The bentwood chair was a favourite of Le Corbusier, who used it in many of his buildings. It is made from six pieces of curved wood, either beech or ash.

"Because of the bend of the backrest, the 209 is a very labour-intense and precious product," says Philipp Thonet in the movie, which was filmed at Thonet's factory in Frankenberg, Germany. "It's really a piece of Arts and Crafts."

Traditionally, the 209 chair is made from beech with a rattan seat. Thonet also produces a version of the chair with a padded seat and this year has been experimenting with upholstering it with a new material by flooring company Bolon.

"We are collaborating with Bolon, reinterpreting the classic 209 chair by using the new material called Villa La Madonna," Thonet explains.

Originally designed for a collection of rugs, which Bolon unveiled earlier this year at Stockholm Design Week, Villa La Madonna features a square geometric pattern composed of strips of vinyl and metalised polyester.

"We specifically picked the Villa La Madonna material because we felt the straight lines [contrasted] very well with the round ergonomic shape of the 209," Thonet explains. "It adds a nice interesting new fabric to a classic chair."

The project is part of an ongoing collaboration between Bolon and a range of furniture producers around Europe, which are experimenting with using the company's woven flooring materials to upholster furniture. 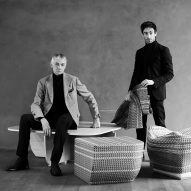 While the project with Bolon is experimental, Thonet says that he was so impressed with how the chair turned out that the company is considering incorporating Bolon fabrics into its collection.

"It started off as an experiment, but we are so surprised with the results that we might even use it in our own range and offer it to our clients," he says.

This movie was filmed by Dezeen for Bolon in Frankenberg, Germany. It is the eighth in a 12-part series exploring Bolon's history, design and technology. Music is by Tobias Lindén of Fry Communications.

Watch all the movies at: www.dezeen.com/bolonatheart