Los Angeles architecture studio CHA:COL has renovated an apartment for a writer, which features bespoke millwork and decor based on popular mobile video game Monument Valley.

The clients – a novelist and a game designer – wanted a retreat from the city to both live and work. The studio simplified the space to accommodate the couple's lifestyle.

CHA:COL divided the apartment into a private area – partitioned off to the right the threshold – and a combined kitchen, lounge and study at the end of the entry hallway.

The modifications reveal services, as well as heavy timber posts and ceiling beams.

The wood provides warmth to the space. It also balances the brightness from large windows reflected by white-washed walls, light flooring and glossy finishes of built-in furniture.

Custom-made millwork defines the kitchen by the entrance to the combined area, and sets the lounge apart from a work space at the other end. In reference to the client's profession and the title of the project, the latter installation was dubbed "the writer's block".

"The writer's block was envisioned and designed as a two-sided object that clearly demarcated spaces," CHA:COL principal Apurva Pande told Dezeen. "One side was designed as the more public, entertainment/socialising area while the other, more private side, was designed as a writer's desk."

The studio wanted the space to motivate the clients in their creative pursuits, as well as be suitable for their living habits.

To make the apartment more whimsical, the designers placed a large, geometric graphic along the wall facing the lounge.

The pattern of the graffiti extends onto the grey carpet as striations. Where the lines intersect with the writer's block, they flow into three sections of the furniture element that divide niches and inform the angles of shelving units.

Both the palette and the layout of the design reference Monument Valley – a smartphone puzzle game that has proved popular with many creatives due to its impossible architectural mazes and colourful stylised graphics.

"Monument Valley is unique in its ability to transform 2D sets of lines and shapes into a surreal 3D landscape that the player inhabits," Pande said. "Since the clients had a gaming, animation background and we loved playing the game as architects, we decided to use is as our central inspiration while designing the space."

"Just the way Ida [the game's central character] moves through tilted planes and angular walls, we envisioned the clients moving through the central creative area into the lounge. Therein lies the interpretation of 3D becoming 2D and vice versa," the architect added.

Gargoyles from the old interior still perch along the walls, painted over to serve as a humorous contrast to what CHA:COL now describes as a "compact, urban oasis".

Other apartments tailored to the work habits of creative clients include a London micro apartment resembling a religious retreat and an Uptown Manhattan residence featuring nooks with customized furniture. 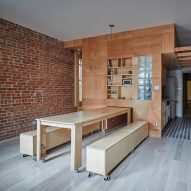