These anthropomorphic vases, on display during Milan design week, are part of a project by Italian designer Matteo Cibic, who challenged himself to make a new one each day for a year.

Cibic took the idea for the series from Italian painter Giorgio Morandi, who spent his career carefully honing still lifes of pottery and bottles.

Starting on 1 January 2016, the designer dedicated time each day to drawing and making a different vase – often adding nose-like or phallic protuberances. He then published pictures of each completed vase on his site, selling them to the first buyer.

"This Italian painter did it for 40 years, so in order to understand how it became so compulsive and repetitive, I started making one vase every day for a year."

Cibic, who set up his own studio in 2007, carried out extensive research into historic styles of pottery, examining ancient Egyptian, Roman, Etruscan and Babylonian examples to understand the various forms used over time.

The designer imbued each vase with a "persona", as he calls it, by including extra details such as handles that jut out like ears, or pipes that branch out like the trunks of a cactus.

At the Vasonaso exhibition in Milan, the designer is showing 30 vases from the series, arranged according to colour. He's also designed a set of new vases, which have been grouped together as couples, and is showing development drawings taken from the year-long project.

"I learned that objects have a life themselves and we don't see it somehow," he added. "We don't give value to objects where we work in a fast-fashion world. I spent a lot of time doing compositions of objects that I've never made in my life before, and it helped me understand a new way of putting together colours and shapes, even for other projects."

The Vasonaso exhibition is on display at Foyer Gorani in Piazza Gorani 5, for the entirety of Milan design week. Also on during the fair is an installation that encourages visitors to gamble on the stock exchange and an aquarium of jellyfish-like silicone vases created by Nendo. 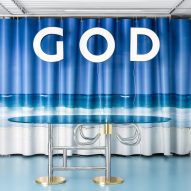