Tate Harmer has unveiled designed for a stone- and timber-covered hotel at the Eden Project ecological park in Cornwall, England.

The London firm led by Jerry Tate and Rory Harmer has just received planning permission for the £8.5 million hotel, which will provide accommodation for some of the one million visitors the Eden Project receives each year.

Slats of locally sourced timber and blocks of stone will be used to cover the facades of the hotel, which will split across several three- and four-storey blocks, and set into a slope to minimise the visual impact on the site.

Within there will be 109 suites and a restaurant, as well as events spaces for concerts and weddings, and teaching rooms for the site's education programme.

Stone will cover the lower portion of the building, while wooden poles will clad the upper storeys in an attempt to further embed the hotel in its natural setting.

The blocks will be connected by an avenue of existing sycamore and oak trees and Cornish hedgerows to create an outdoor event space.

"This building is a unique response to its local Cornish context and the philosophy of the Eden Project," said Tate Harmer's Jerry Tate.

"Landscape is at the heart of the scheme. We are proud to have developed this design with the Eden Project as part of our ongoing relationship," he added.

The Grimshaw Architects-designed Eden Project opened in 2001 in a former clay pit in Cornwall.

Eight huge geodesic domes, known as biomes, enclose part of the 2.2-hectare site to create a temperature-controlled environment for a vast collection of plants described as the "largest rainforest in captivity".

The firm is currently working on plans to create a second Eden Project in Qingdao, China, named China Eden having signed a £100 million deal in 2015.

Work on Eden Hotel is expected to begin later this year, with completion slated for 2018. 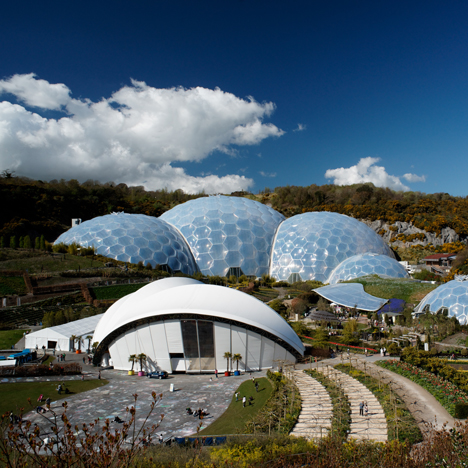 Visualisations are by AVR London.