Minneapolis firm D/O Studio has taken cues from Minnesota's Scandinavian climate and heritage when designing a home that "warms the blue light to pure white", while cultivating vegetation native to the site.

Named Nordic Light, the house is situated in a residential neighbourhood of St Paul, Minnesota. Geographically, the city marks the border between the Great Plains to the west and the Great Lakes to the east.

The architects describe the region's landscape as a savannah, where overhanging trees scattered across tall grass prairies. In an attempt to conserve the natural terrain, the flora surrounding the home is restricted to native species.

The colour of the wood siding that clads the building will fade, a feature the firm expects will draw more attention to the vegetation.

"The smooth cedar silvers over time," D/O project designer Al Rahn told Dezeen." As the landscape develops, the house will become visually quiet with the silvery native grasses and majestic white oaks that have been on the site for a century."

The long, dark winters of the area are similar to those of Scandinavia. The title and design of the house directly refer to the climactic similarity, as well as to the region's cultural heritage.

"Much of Minnesota's population has ties back to northern Europe and their cultural traditions," Rahn said. "The integration of architecture and nature, structure and light are essentials to a happy life when six months out of the year are dominated by darkness and cold."

The interior takes cues from the Nordic concept of Ljos, which "describes whiteness that becomes essential to our psychological survival as the world turns dark and blue".

Past the threshold, a wide living room spreads out laterally. The lounge flows into a kitchen that recesses into the plan.

A bedroom bulges southward into the space, subtly segmenting the otherwise open plan. Behind its south wall, the bedroom hides the dining room that sits adjacent to the kitchen.

Light wood floors and ceilings found across the first storey, as well as the kitchen's glossy white surfaces, help to reflect light provided through large windows.

"By bouncing the low winter sunlight off of two lightly whitewashed oak surfaces – the floor and the ceiling – it immediately warms the perceived light," said the project designer. "The white walls amplify the light on days when the sky is grey."

The double-height dining room reveals the white ceiling spreading over the the upper level, where the designers shifted to a monochrome palette.

The walls of the first floor are painted in white, offsetting the black-carpet floors.

The architects wanted the lounge to transition smoothly into the west terrace, which features black-panelled railings.

"The floors on the second level have a direct relationship to the rooftop space, and were chosen to create a seamless transition from interior to exterior roof deck," Rahn said.

Aside from the informal living room and terrace, the upper level accommodates two bedrooms, a bathroom and laundry at its east end.

Minnesota is also home to a rustic dwelling consists of stacked boxes and a house with a courtyard framed by a whitewashed sauna – both by local firm Salmela Architect – and a set of wooden cabins by HGA Architects and Engineers.

Photography is by Chad Holder, unless otherwise mentioned. 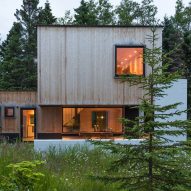