The graphic identity spans invitations, posters, leaflets, books and exhibition signage for Eliasson's show at the Espoo Museum of Modern Art in Finland.

The logo is central to the design. Eräpuro based its shape on an installation created by Eliasson that features five mirrors placed in a pentagonal formation.

Eräpuro, who was inspired by "fluid and liquid" graphic identities, designed the logo as three-dimensional, with the name of the exhibition scrolling around the exterior of the shape.

"There was a discussion around having it as an anamorphic solution as well," Eräpuro told Dezeen. "But I saw the identity animated in my head. Through the various design stages we thought this particular pentagonal shape is the one, and when it is static, such as on the exhibition walls, it feels like it is jumping out."

The designer chose typeface Circular – regularly used by Studio Olafur Eliasson in its work – for the identity, pairing it with serif font GT Sectra to add a "Peter Saville vibe".

The grey tones in the printed materials were chosen to reflect the museum building's concrete, and a laminated mirror foil referenced the main Pentagonal Mirror Tunnel installation by Eliasson.

Eräpuro, who specialises in branding, typography, publication and exhibition design, previously worked on graphic design projects for engineering firm Arup in London, before moving back to hometown Helsinki, where he works as an art director for design studio Kuudes. He's collaborated with furniture brand Artek, as well as Nokia and the Finnish Institute.

The Pentagonal Landscapes exhibition runs from 8 February to 21 May, bringing together a collection of pieces by the artist to mark the museum's acquisition of his Pentagonal Mirror Tunnel.

The Danish-Icelandic artist has been showing work in museums around the world since the late 90s. He has also presented several public pieces – including floating melting icebergs from Greenland to Copenhagen in 2014. 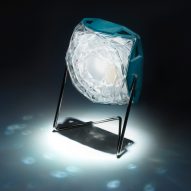 Eliasson's work is varied, covering everything from set design for Wayne McGregor's Tree of Codes ballet to furniture for Moroso  and a series of solar-powered mini lamps.

He ranked third among artists on Dezeen Hot List, a data-driven survey of the most influential figures in design and architecture. His Berlin studio, which was set up in 1995, includes 90 craftspeople.