This week on Dezeen, a museum dedicated to Palestinian culture opened in Birzeit and Renzo Piano finished a sail-covered art gallery in a French winery.

The museum dedicated to Palestinian culture by Heneghan Peng opened to the public in the city of Birzeit, designed to reference the terraced landscapes of the West Bank.

Richard Rogers and David Chipperfield were among British architects to demand the government give clarity on the status of EU nationals working in the UK after Brexit.

The AIA admitted that architecture isn't meeting sustainability goals, and a major initiative to clear rubbish from the ocean was announced.

A luxury hotel opened inside a former grain silo renovated by Heatherwick Studio in Cape Town's harbour, and Zaha Hadid Architects unveiled its design for a residential complex in a tropical setting near Cancún.

EFFEKT unveiled a housing scheme based on a mountain range for the Slovakian city of Bratislava, and MAD's hill-shaped towers neared completion in Beijing.

The Italian courts sided with Molteni&C in a legal dispute against Cassina, after both brands exhibit the same chair during Milan design week.

London Design Festival announced its installations for 2017, including a "building block castle" by Camille Walala and an undulating tapestry by Ross Lovegrove.

We rounded up 12 must-see exhibits at this year's Venice Art Biennale and reported on key trends from New York's annual design week, including the rise of all-female design exhibitions in response to Trump's inauguration.

We've also been hosting a series of parties, talks and events in the city, including a discussion about the future of office design with Hem, WeWork and Philippe Malouin.

Popular projects this week included a prefabricated cabin designed as a "battery-charging station for humans", atmospheric visuals of a Ukrainian mountain residence and an Arts and Crafts-inspired home in Melbourne. 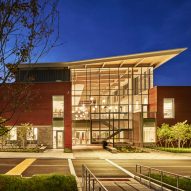