An illuminated alabaster totem pole and a marble disk that appears to balance on a neon string feature in New York design collective Colony's politically charged furniture and lighting installation.

The installation represents each designer's meditation on the meaning of "light" from both a philosophical and aesthetic perspective, with a focus on how the recent tumultuous political phase for the United States – marked by the election and inauguration of Donald Trump – has influenced design.

Allied Maker, a Long Island-based design and manufacturing studio run by husband-and-wife team Lanette and Ryden Rizzo, is exhibiting its alabaster totem lamp at the show.

The hefty yet ethereal lighting piece stands nearly two metres tall, and comprises cloudy, planet-shaped forms are piled atop an oak and brass base.

"I've noticed the trend of minimalism and extreme functionality in design is fading out," Ryden Rizzo told Dezeen. "Because people want to escape the current political landscape and the reality that we are facing in our world – in lightness, in luxury and through more extravagant design."

Rizzo's statement echoes trends observed at Design Miami 2016 – which took place a month after Trump's election – where designers and gallerists told Dezeen that modernist design was in decline, making way for "anarchic forms" based on a premise that "apocalyptic times call for extreme furniture".

In Allied Maker's design, glowing light is emitted from the stacked orbs, dramatically contrasting with the dark cracks and grain of the stone.

"We wanted to work with alabaster over marble because of its translucency and how much lightness the material brings," Lanette told Dezeen.

"For us, it was all about the material – about the lightness of the alabaster compared to its weight," Ryden added. "We thought that it was a beautiful contrast, that this object that weighs over 500 pounds (227 kilograms), is totally translucent and light."

In another stone-based design, two neon and marble lamps from designer Farrah Sit hang suspended in the entrance to the show. The first features two Carrera marble cylinders, thich appear to bend slightly over a curved brass plate.

A neon tube runs through the marble and appears to hang loosely from the stone, like a broken archery bow.

In her second design, Sit again exploits the malleability potential of the neon tubing in her necklace-shaped light. Threading the neon through a marble cylinder at the top of the design, the two-metre tube of light loops underneath a marble disc, which evokes the weight of a pendant hanging on chain.

Colony is a community of independent furniture, lighting, textiles and objects designers who came together in August 2016 ahead of NYCxDesign festival, to discuss the premise for their upcoming show.

"Our group of designers sat together and discussed business, design, and the year ahead with excitement and optimism," said Colony founder-curator, Jean Lin. "We decided Lightness was a theme we could all tackle with proficiency and vigour, one that would work for each individual studio and result in a cohesive and compelling whole."

The period that elapsed between last year's festival and the co-op's show this year has proven to be a turbulent period for the creative industry.

"Lightness drifted far from our minds – we were enveloped in a darkness created by the divisive and vitriolic tenor of our country and our world," said Lin. "Colony co-op meetings and correspondence became a place for shared anger, fear and ultimately support." 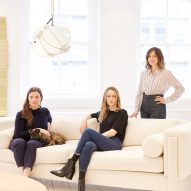 Designing Women is one of several all-female exhibitions taking place during this year's NYCxDesign, which have also been organised in reaction to the current political climate.

The others include Chamber's A Room With Its Own Rules show and The Future Perfect's display of furniture by Georgian studio Rooms.

Photography is by Alan Tansey