Skateboards, Snapchat Spectacles, an early Gay Pride flag and a self-driving car sit side by side in a new Design Museum exhibition that explores how California has become the new centre of the design industry.

Called California: Designing Freedom, the exhibition documents the American west-coast counterculture movements of the 1960s, and looks at how they fed into today's technology scene in Silicon Valley. It opens today at London's Design Museum.

Curators Justin McGuirk and Brendan McGetrick set out to explore the cultural cachet of the phrase "designed in California", which they saw increasingly used to sell products.

"It seemed really surprising to me that no one had done a show about contemporary Californian design," McGuirk told Dezeen. "If you think about 'designed in California' – which is the phrase Apple uses on all their products – this is the contemporary equivalent of 'made in Italy', but for a world of devices."

The curators' view is that a common thread links Californian design from the 1960s through to today: the idea that it can provide people with the "tools of personal liberation".

This is exemplified by the Whole Earth Catalog, a 1960s knowledge-sharing magazine that served as something of a predecessor to Google or Wikipedia. Its editors published information they hoped would help people live self-sufficiently and holistically, particularly when building their own communities.

The magazine is featured in the exhibition, along with relics from other early tech-minded counterculture groups like the Homebrew Computer Club, the Whole Earth 'Lectronic Link, architecture collective Ant Farm, the Burning Man festival and the Woman's Building.

The exhibition also tells the story of major companies like Apple, whose founders Steve Jobs and Steve Wozniak met at the Homebrew Computer Club and went on to start Apple in Jobs' parents garage in the 1970s.

"What happens is when the commune movement dies out in the 1970s, these ideas start to get taken up by the hacker movement and the computer geeks, and they start to frame what they're doing with computers in the same way," said McGuirk.

Among the significant objects in the exhibition is Google's self-driving car, now branded Waymo and on display for the first time in the UK.

There are also hand-drawn sketches from the Apple archives, protest posters from the 1960s, an eight-coloured version of the rainbow Gay Pride flag stitched by Gilbert Baker in 1978, early editions of Californian technology magazine Wired from the 1990s, video of Douglas Engelbart's 1968 "mother of all demos", and site plans for the new campuses of Apple, Google and Facebook – which the curators compare to the communes of the 1960s.

Among the contemporary California-born gadgets on display are Snapchat Spectacles, the Amazon Echo, and fitness trackers Jawbone and FitBit.

The exhibition design is informed by geodesic domes, a favourite form of architecture among many hippie movements in the 1960s and 70s.

The museum moved into its £83-million London home, designed by John Pawson and OMA, at the end of 2016. 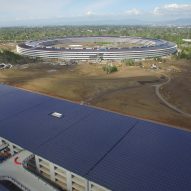