First announced in March, the Creator Awards was launched by WeWork up to "recognise and reward" emerging designers and entrepreneurs in cities all around the world.

The company has pledged to donate a total of $20 million (£15.8 million), through a series of award ceremonies throughout 2017. The first event took place in Washington DC in March, and was followed by one in Detroit in May.

The next batch of prizes will be awarded in Austin, Texas, next week, followed by events in London, Berlin, Tel Aviv and Mexico City. All winners will then come together in New York for the global finals on 30 November 2017.

"The Creator Awards is not just about pitching and connecting, it's about entering a city and changing the reality of that city, which is what we love to do," adds Adam Neumann, co-founder and chief executive officer.

WeWork was first launched in 2010, and now hosts 190 co-working spaces in 48 different cities. It has a global membership of 100,000 people, but says that supporting "creators" is its main goal.

In line with this ethos, the company has recently opened a series of new locations, each designed to reflect the unique culture and design heritage of their locations.

WeWork Long Beach features an industrial-influenced installation by artist Grace Teng, while Santa Monica's WeWork Promenade features a mural that draws on the influence of the Native American tribes who once traded in the area.

The Creator Awards are open to everyone, even if they are not WeWork members. According to Neumann, "anyone who brings a new idea into the world, pursues their passion, and believes in something greater than oneself, is a creator". 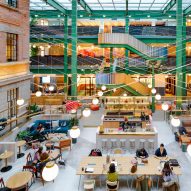