Co-working company WeWork, which recently rebranded as The We Company, has opened a store and public workspace in New York City and is exploring more real-estate ventures.

The We Company's Made by We retail space, cafe and workplace in the Flatiron neighbourhood, which can be used by anyone without the need for a membership.

The new venture offers individual workstations that can be rented by the minute, including 100 "seats" and six meeting rooms for four to ten people.

"Made by We was launched with a vision to connect the We community with the rest of the world, and provide people with the best on-demand workspace, services and products, no membership required," said company partner Julie Rice.

"Everything we do at The We Company, from the spaces we curate to the service offerings we provide, is intended to create meaningful human connections."

Located on a corner site at 902 Broadway, the project was designed by The We Company team to feature bright white interiors, filled with various seating areas and colourful merchandise.

Across one wall are built-in shelves with hundreds of products made by current WeWork member companies, like candles, hats, speakers, headphones, and We-branded shirts and hoodies. 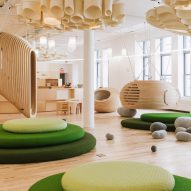 Other products include wallets and laptop cases by Dynomighty Design, chickpea snacks by Lebby, reusable water bottles by Memobottle, and cards and stationery by Miks Letterpress.

Made by We houses a Bluestone Lane cafe, with yellow lights glowing forming a sun-like motif across the front of a counter.

The We Company announced its name change earlier this month, to better reflect the range of services it now provides.

The company is expanding its workplace offerings with HQ by WeWork, which provides larger, private offices without WeWork branding to medium-sized businesses. Six of these have been leased so far in New York City.

Last week, reports emerged that The We Company co-founder and CEO Adam Neumann is buying properties and leasing them to WeWork, earning billions of dollars as an unofficial landlord.

Neumann also announced that the WeGrow education initiative will expand its offerings with a Jewish curriculum, as stated at UJA-Federation of New York's Wall Street Dinner in December 2018.

Co-working spaces in New York City are becoming increasingly prolific and diverse in their offering. Meet in Place recently launched a location in the Financial District where companies can rent spaces just for meetings, while The Wing provides workspaces designed for women.

Photography is by Dave Burk.