Snarkitecture's Daniel Arsham has collaborated with Adidas for the first time, on a pair of trainers designed to look like they were chipped away at during an archaeological dig.

The shoe feature frayed sections, while the rubber sole appears to have been chipped away and left with jagged edges. Its white laces are finished with painted metal tips.

"Arsham's fascination with archeology and 20th-century cultural artefacts is translated into the design," said Adidas.

"With a deteriorated canvas construction, frayed edges and a tonal Chalk White colourway, the New York silhouette is stripped back to its rawest form, which allows concealed design features to be hidden and gradually discovered."

The shoes, which will be released on 22 July, also feature a secret message printed in ultraviolet (UV) ink on the mesh midsole.

When this section of the shoe is placed under a UV light, a hidden message appears reading "the past is present".

The collaboration is marked on the shoe's tongue, with the designer's name and the word "past" hidden on its underside.

"Both of these subtle design elements nod to Arsham's artistic ethos of discovery and hidden meaning," said Adidas.

Arsham, an American artist and designer, often uses all-white colour palettes in his work in reference to his colour blindness.

But recently he has been able to see a more vibrant spectrum of hues using special glasses that refract light – inspiring a wave of more colourful pieces.

For his Hourglass installation at Atlanta's High Museum of Art, he built a blue zen garden complete with a Japanese tea house and a purple cave formed from spheres. 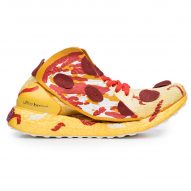 Arsham co-founded architecture studio Snarkitecture alongside Alex Mustonen in 2008. The duo – who ranked at number 202 on the inaugural Dezeen Hot List – often create spatial installations and in the past have suspended 700 Air Jordan replicas in a Brookyln menswear store and filled a Washington DC museum with almost a million plastic balls.

More news and design from Adidas