This week on Dezeen, RIBA revealed the six projects shortlisted for this year's Stirling Prize, while IKEA unveiled its new collaboration with Hay.

A studio for photographer Juergen Teller, a new wing at the British Museum and a "characterful" housing block (pictured) are among the six projects vying for the 2017 edition of the RIBA Stirling Prize, which is awarded to a building judged to have made the greatest contribution to British architecture in the past year.

In design news, IKEA and Hay revealed the full range of furniture and homeware products from their collaborative Ypperlig collection.

Apple launched 52 new emojis, including a woman in hijab and another breast-feeding, and Toblerone took legal action against Poundland over a mountain-inspired chocolate bar.

Meanwhile, Google Glass made a comeback after a two-year hiatus and Facebook looked to the search engine company for inspiration by filing a patent for a Project Ara-style smartphone.

Also this week, two competing designs were unveiled for the Norwegian government headquarters, following the 2011 terrorist attack, and a low-cost school for 3,000 Syrian refugee children was planned for a camp in Jordan.

Architect Winy Maas of MVRDV claimed that Asian cities are racing ahead of their western counterparts and Stefano Boeri unveiled his first "vertical forest" project in the Netherlands.

Elsewhere in the US, a floating concert hall designed by Louis Khan came under threat, and may be scrapped in a Louisiana shipyard if it doesn't find a new owner.

Popular projects this week included a trio of wine-tasting pavilions open to the outdoors, a pale-brick extension to a Victorian house in London and a Venice Beach home with an askew pitched roof. 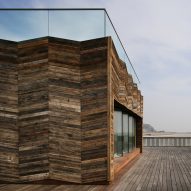