Some Apple workers hate the open-plan layout of their new Foster + Partners-designed campus so much they might quit, according to reports circulating around Silicon Valley.

A $5 billion (£3.8 billion) development eight years in the making, the Apple Park campus in Cupertino, California began welcoming the tech giant's employees in April. The remaining employees expected to work in the building are due to move in later this year.

However, John Gruber, who runs the Apple-focused site Daring Fireball, said in his podcast on Sunday that he has received a number of complaints via email from Apple employees reluctant to accept the working conditions of the campus.

Gruber said the criticism centred on Apple Park's open floor plan, which is based around "pods" – huge open workspaces with shared tables. It has apparently rankled some of the company's engineers and developers, who are used to private offices or cubicles.

"Judging from the private feedback I've gotten from some Apple employees, I'm 100 per cent certain there's going to be some degree of attrition based on the open floor plans, where good employees are going to choose to leave because they don't want to work there," Gruber said.

There are 80 pods on each of the four floors of Apple Park. Furnished with custom pieces by Japanese designer Naoto Fukasawa, the soundproof spaces feature huge collaboration tables made from European white oak.

"When he was shown the floor plans, he was more or less just 'f*ck that, f*ck you, f*ck this, this is bullsh*t,'" Gruber said. "And they built his team their own building, off to the side on the campus... My understanding is that that building was built because Srouji was like, 'f*ck this, my team isn't working like this.'"

Open-plan offices have become more common since the 1990s but have come under scrutiny in recent years. A recent Haworth's white paper said that open-plan offices are "sabotaging" employees' ability to focus at work, with office workers losing 28 per cent of their productive time due to interruptions and distractions.

Similarly, Gensler's 2016 UK Workplace Survey found that workers were more likely to innovate if they had access to a range of spaces supporting different working styles – including private, semi-private and open-plan environments.

New products have emerged to tackle issues of noisiness and lack of privacy in open-plan offices, including sound-dampening felt lamps, wall-mounted phone booths and multitudinous dividers.

Apple Park is not yet fully finished and is yet to be revealed to the public. During a recent tour of the campus with the WSJ.Magazine, Apple's design chief Jony Ive revealed he is anxious about how the building will ultimately be received but also excited for the move.

"I'm just looking forward to going to see an engineer I'm working with on something, to sit there and perhaps walk out and sit outside for a bit with him, to be able to go to the workshop and start to see how we're building something," he said.

All of the 12,000 Apple employees due to work at the campus are expected to have moved in by September 2017, when the building is fully completed. It will have been eight years since the late Steve Jobs hired Norman Foster for the project.

Other early criticism of Apple Park has come from Wired, which claimed the building is "retrograde, literally inward-looking" and lacks consideration for its surroundings. 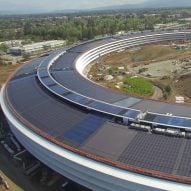