A visitor to the Serralves museum in Porto, Portugal, has been hospitalised after falling in an art installation designed by Anish Kapoor.

British artist Kapoor's 1992 piece, Descent into Limbo, features a cube-shaped building with a 2.5-metre hole set into its floor, which is painted black to give the impression of an infinite drop.

An Italian man in his 60s fell over inside the installation at the Serralves, reported local newspaper Público. It is unclear if he fell into the hole or within the general vicinity.

"The visitor has already left the hospital and he is recovering well," a spokesperson from the museum told Dezeen.

The area of the exhibition where the work is displayed has been closed off for repairs.

The museum said all security measures had been followed, including warning signs and a member of gallery staff positioned inside the installation. When the Descent into Limbo reopens the museum plans to add additional warning signs. 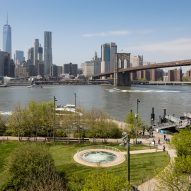 Anish Kapoor: Works, Thoughts, Experiments is the first major show for the artist in Portugal, and Descent into Limbo is the oldest of his 56 work's on display in the museum's parklands.

The Serrevales museum, which opened in 1999, was designed by Portuguese architect Álvaro Siza Vieira. Also in the grounds is the Casa de Serralves, an art deco villa and museum designed by architects Charles Siclis with José Marques da Silva in the Streamline Moderne style. 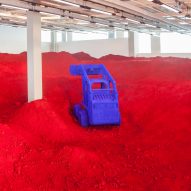 Turner Prize-winning artist Kapoor often plays with optical illusions that create the impression of infinite depths in his work, such as the seemingly bottomless whirlpool he installed in a park in New York in 2017.

The artist, who has been outspoken about opposing Donald Trump, said the piece stood as "obvious" comment on American politics.

In 2016 he acquired exclusive rights to a the blackest black, a pigment developed by British company NanoSystems that absorbs 99.96 per cent of light. Kapoor's attempt to monopolise the colour started a feud with fellow British artist Stuart Semple, who has attempted to bar Kapoor from using the "world's pinkest pink" and a colour-changing pigment.