SANAA has built a small passenger terminal shaped like a cloud for a port on the Japanese island of Naoshima, which is famed for its contemporary art scene.

Japanese duo Kazuyo Sejima and Ryue Nishizawa and their firm SANAA designed the terminal for passengers waiting to disembark the island – giving them a place to park their bicycles or motorbikes or use the restroom before their journey.

It replaces an old terminal at the village of Honmura, one of two key ports on the island located in the Seto Inland Sea in Japan's Kagawa Prefecture.

It is a landing point for tourists visiting Naoshima's contemporary art museums such as Tadao Ando's Chichu Art Museum, and its site-specific installations like Yayoi Kusama's Yellow Pumpkin sculpture.

"We wanted to create something like a landmark for islanders as well as for visitors who visit the island for the first time, so they can easily find the boarding point for the ship," said the studio.

"With this unique shape, people who are heading to the terminal or people approaching the terminal by ship can easily find the port, even from a distance," it added.

"We hope that this place will become a new symbol for the village where both islanders and visitors can come together."

The 8-metre-tall form is modelled on a cumulonimbus cloud and is made up from intersecting spheres of fibre-reinforced plastic spheres. The bulbous plastic structure is supported by a gridded wooden frame.

The semi-transparent form glows like a beacon when lights within are illuminated at night.

SANAA placed at at number 8 on the inaugural Dezeen Hot List, largely due to the overwhelming popularity of the practice's sinuous cultural centre at the Grace Farms nature reserve in Connecticut, which completed in 2015.

But the studio has been perennially popular and earlier this year architectural photographer Edmund Sumner trawled through his archives to pick out some of the duo's best work. 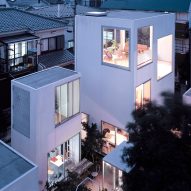