The monochrome graphic system that the late Otl Aicher created for the German town of Isny im Allgäu features in an exhibition at this year's London Design Festival.

Otl Aicher's Isny showcases the graphic identity that the modernist graphic designer and typographer – best known for creating the Munich Olympics identity in 1972 – developed for the town around the same time.

Hosted by London design agency dn&co, the exhibition reveals a graphic system made up of 128 pictograms, produced over the course of a decade.

Using abstract iconography to illustrate aspects of town life – ranging from forests and animals, to churches and pretzels – Aicher created a design language where icons could be combined and rearranged to depict a range of narratives.

Unlike traditional tourist identities of the era, Aicher's designs represented the town's rich alpine landscape in austere black and white – a radical decision that polarised opinions in the town.

"We've got an alpine town that is known for its outdoor scenery and fantastical outdoor pursuits, yet Aicher represented it entirely in black and white," exhibition curator Patrick Eley told Dezeen.

According to Eley, by rejecting the "blue skies and blonde waitresses",  Aicher made a lot of enemies in the town.

"I think it was a subversive technique," Eley said.  "Doing something that was black and white, that was a signal shift from the colour culmination of the place before, was so effective that people found it quite difficult to swallow to begin with."

Since the completion of the project in 1981, the project has "gone through a rollercoaster of acceptance".

Today, Aicher's designs can be seen across Isny – on flags, buses and signage.  "I think the town has realised that it has a very good bit of design heritage that it wants to hang onto and bring back into the public domain," Eley explained.

Aicher passed away in 1991, but has a reputation as as one of the 20th century's most iconic designers, thanks to his stark and reductive style.

As well as his design for the Munich Olympics, he designed graphics for brands such as Lufthansa, Braun and Bulthaup.

To accompany the exhibition, dn&co has released a publication titled Otl Aicher's Isny: How a German town defied the postcard mentality. Featuring an preface written by Norman Foster, the book chart the history of the project, from its original release to the present day. 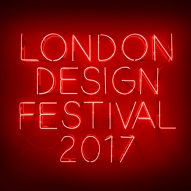