London-based designer Philippe Malouin has created a freestanding mirror from a single metal cylinder that has been flattened and polished at one end.

The mirror – launched through online design shop Umbra Shift – is made from polished steel, which has been carefully flattened to form a flat surface.  "It is deceptively simple," the designer told Dezeen.

By polishing the flattened surface, Malouin made a reflective surface that doubles as a mirror.

"The design of the mirror was a coincidence," he explained.  "I designed it a few years ago after pressing a metal tube into a vice that I was going to use as a shelf bracket."

"I realised that having a round base followed by a flat surface allowed the item to have the circular end act as a base to stand on. And secondly, it allowed the flat part to have another function, in this case, a mirror," Malouin said.

The cylindrical base enables the mirror to stand on its own. It can be positioned on a table top or can be held as a hand mirror.  "The base seamlessly transitions into a planar surface which can be used as a hand mirror or admired as a sculpture," the designer explained.

"As all steel tubes will have slight differentials in their composition, there will not be one item that will press and deform the same way as another," he added.

Having graduated from Design Academy Eindhoven, Malouin set up his studio in 2009 after working for British designer Tom Dixon. His previous work ranges from an installation of swings at a Milanese palazzo to experimental room dividers for NYCxDesign 2017. 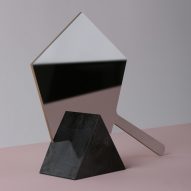