Classic cars are frequently used as props when photographing architecture projects, while sometimes entire homes are designed around an owner's automobile. We've chosen 10 examples of buildings accompanied by photogenic vehicles, from a countryside retirement home to a converted windowless garage.

A silver Jaguar E-Type Coupe takes centre stage in this photograph by François Verhoeven of Villa SG21 in Holland.

Dutch studio FillieVerhoeven Architects built the asymmetric blackened timber-clad house in adherence to strict local planning regulations, due to the historic area, which required that the house include a sloping roof to fit in with the surroundings.

While the barn-stylings of the house reference the area's agricultural heritage, the architects incorporated the owner's wish for a bold, minimal aesthetic by installing large glazed openings on all sides.

Find out more about Villa SG21 ›

A cantilevering balcony shelters a DeLorean DMC-12 parked outside this house in Wales, by architecture practice Hyde + Hyde.

In this image, photographer Michael Sinclair has married the steely tones of the 1980s car to the blues of Silver House's exterior.

Made for a family who relocated to Wales from London in search of a more nature-filled existence, Silver House features glass walls to make the most of the surrounding views.

Find out more about Silver House ›

A black Fiat 500 takes pride of place inside an open-plan living space by Fala Atelier, which was once a windowless garage.

When the 200-square-metre garage was converted into a liveable space for an "open-minded couple with a very tight budget", the Porto-based architecture studio used the industrial concrete flooring to its advantage to create a modern, minimalist space, introducing splashes of colour with the soft furnishings.

Find out more about Garage House ›

The red exterior of a 1950s BMW Isetta adds a bold dash of colour to the muted tones of 3322 Studio's Suspended Patio House.

Large expanses of windows fill the Tel Aviv residence with an abundance of natural light across the open-plan living spaces, which accommodate for the changing needs of the family's young sons.

The concrete walls and steel surfaces are warmed by a wooden Herringbone flooring, with vintage furniture furnishings like the iconic Eames Lounge Chair.

The Quest by Ström Architects

The beige coating of a vintage Aston Martin Vantage compliments the sandy shades of Ström Architects' larch-clad retirement home in the English countryside.

The Quest house was built upon a run-down bungalow that existed on the site since 1917, for a couple looking to retire to a picturesque rural area.

Floor to ceiling glass doors and larch cladding form the exterior of the house, which "eschews the usual trappings of staid, retirement home design".

Find out more about The Quest ›

An electric sports car has been made part of the interior in this former carpenter's workshop, "securing a prime parking spot in the middle of Arnhem's city centre," said architect Wouter Oostendorp.

His Rotterdam-based Studio OxL converted this once 210-square-metre workshop into a three-bedroom apartment. The open-plan interior features wide garage doors that open directly from the street into the living space.

As the electric car has no exhaust, the car fits into the interior "just like a painting", and is able to be driven away without polluting the living space, Oostendorp told Dezeen.

Find out more about Carpenters Workshop ›

The owners of this timber-clad home prioritised their vintage Mercedes 280sl (otherwise known as a Pagoda) to such an extent that they named their house after it.

Bulgarian practice I/O architects built Pagoda House into the hillside, so that residents can appreciate surrounding views of the city skyline while still being secluded from the street.

The interior features a glass wall between the stairwell and a built-in garage, which turns the owner's classic Mercedes into a decorative object when not in use.

Find out more about Pagoda House ›

Hexagonal segments provide parking bays for classic cars in this Tokyo home and workplace for a car dealer.

The reinforced concrete structure uses one floor as the client's family residence, and the other as his office and showroom.

Both floors are separated by triangular-arched openings, which align to form a lane down the middle of each floor, providing an access route for cars on the ground floor.

Find out more about Graz Showroom ›

This red-brick loft residence in Melbourne, Australia, houses the client's red Ford Mustang in a garage at the rear of the property, which features exposed brickwork and translucent doors.

Previously occupied by a jam factory, an aerated water factory, an advertising agency, and an engineering consultancy, the converted 19th-century warehouse has separate entrances for different members of the extended family who live there.

Find out more about Water Factory ›

Underground Garage by B29

An undisclosed royal client keeps his classic cars and motorcycles, including an Austin Healey Sprite, in a secret subterranean garage space in Switzerland.

The concrete and brick construction takes its cues from a 19th-century stable block, replacing the racehorses with luxury vehicles.

Find out more about Underground Garage › 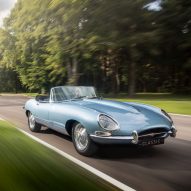