Japanese-Mexican sculptor Kiyoto Ota has built three wooden houses designed to make their inhabitants feel vulnerable rather than safe, including one that sucks the air from the interior and another that rains on anyone inside.

On show at Mexico City's Museo Universitario del Chopo, Ota's Tres Casas Extraordinarias (Three Extraordinary Houses) each structure is shaped like a small dwelling, but intended to be uninhabitable.

"I'm erasing the function of the house, so for me it's like a sculpture rather than a house," said Ota, speaking to journalists through a translator. "[They] take out the concept of the house where you feel safe, instead you feel vulnerable."

The first of the three, named Casa Vacía (Empty House), is modelled on the artist's parents' home in Japan. Cruciform in plan, it has doors on its front and back wings, and three fans integrated into the walls on the other two sides.

These fans suck the air from the interior, so anyone inside would feel their breathing restricted. The roof is capped with cat-faced gargoyles, which were added to symbolise loneliness.

"Every time I go back to Japan, I visit this house and it feels empty," he said. "So it's a symbol of that feeling."

The second residence, Casa de Lluvia (Rain House), has a simple ellipse shape and a steep shingled roof. Its only room experiences a constant downpour from the ceiling, showering anyone who enters – although this is prohibited at this exhibition.

Finally, Casa de Alicia (Alice's House) is a tall structure made from paler wood than the previous two. From each of its gabled ends, a decorative white door provides access to a staircase that leads to nowhere save a small window.

As they ascend, the stairs narrow while the ceiling lowers and the walls enclose, creating the illusion that the occupant has grown during the climb. The idea plays on the popular novel Alice in Wonderland, in which the protagonist changes size several times.

Ota created the houses over a three-year period. The first completed in 2014, while the final piece was finished this year.

The three houses accompany another trio of wooden sculptures, designed as womb-like enclosures. Curved timbers are used to form the miniature caves, which are displayed in a row close to the pavilions.

The exhibition is located on the ground floor of Museo Universitario del Chopo, 10 Calle Doctor Enrique González Martínez, Colonia Santa María la Ribera. The museum occupies a building that was originally constructed in 1902 for an exhibition in Dusseldorf, but dismantled and shipped to Mexico City, where it was reassembled.

The exhibition runs until 3 December 2017, coinciding with this year's Design Week Mexico, which took place 11 to 15 October 2017. The event was pushed back a week after Mexico City suffered a deadly earthquake in September 2017. 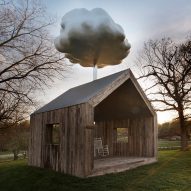 Elsewhere in the city for the design week, local studio Materia constructed a pavilion that casts shadow patterns across itself beside the Museo Tamayo in Chapultepec Park.

Photography is by Ramiro Chaves.