Design Academy Eindhoven graduate Roxanne Brennen has created a range of dining tools designed to encourage a way of eating that she claims helps to trigger the same brain activity as sexual foreplay.

A series of irregularly shaped vessels, plates and utensils make up the Dining Toys collection, which Brennen is presenting during Dutch Design Week.

The objects are each designed to enhance the pleasure of eating by releasing endorphins in the same way that sex does.

"Your brain reacts to eating the same way that it reacts to sex," Brennen told Dezeen. "It's all about the pleasure centre being activated and the amount of endorphins released."

She says the freedom to experiment and lose control can heighten sensation during sex, and has aimed to recreate this response in diners by encouraging them to experiment with spherical bowls, kidney-shaped spoons and plates that have blobby protrusions.

The objects are moulded by hand from white stoneware, which has a texture and appearance similar to porcelain. Brennen says the process allowed her to think carefully about the individual weight and fragility of each piece.

The designer is originally from France, and says she was struck by a businesslike approach to mealtimes when she moved to the Netherlands. This led her to research how formulaic traditions inhibit the western world from deriving maximum pleasure from food.

"We have a set way of eating nowadays," she told Dezeen. "Our etiquette restricts the brain, because our actions are being controlled. Eating is an animalistic instinct, but our current way of doing it minimises the experience."

To challenge these conventions, Brennen's tableware aims to redefine eating as a sensual activity, rather than just as a necessity. The objects are a range of shapes and sizes to encourage users to experiment and disrupt normal mealtimes with variation. The toys also deliberately slow down the process of eating, which in turn builds anticipation for the taste of the food.

"Every time you use the toys, you have a different experience depending on your mood," she says. "I've also been surprised to see that everybody uses the toys in a completely different way."

Brennen is now collaborating with a chef to create recipes that complement her tableware, and wants to create a pop-up in which the entire environment is optimised for pleasure, and where diners can chose their own utensils to eat with.

Brennen is showcasing her work at the Design Academy Eindhoven graduate show until 29 October. Here, sustainable alternatives to household cleaning products and leather material created from cow stomachs are also being presented. 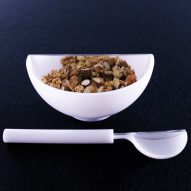