Visual trickery could be the key to reducing food consumption, according to Studio Playfool – which designed this range of mirrored tableware to make your plate look twice as full.

Half/Full was designed by Saki Maruyama and Daniel Coppen, collectively known as Studio Playfool, who are students from London's Royal College of Art.

Made up of a series of mirrored tableware, the project aims to "future proof appetites" in relation to the looming prospect of future food shortages.

"In the near-future, the effects of climate change will take its toll on global food production," said the designers. "When imagining a future that's faced with greater food shortages, we need to ask how we might adapt our own appetites and lifestyle in the present."

"In response to this, we created Half/Full, a set of tableware designed to alter our everyday diets to future-proof our appetites."

Each piece in the set – which incorporates two plates, a cup, a bowl, and a knife, fork and spoon – features a reflective surface.

When food is put onto the plate, the mirror visually multiplies the portion – tricking the diner's perception of fullness and in turn reducing the amount they need to eat.

When developing their design, the studio looked to research conducted by the University of Toyko regarding appetite and eating habits. The designers believe their products could be the answer to changing these behaviours in the future.

"A study led by the University of Tokyo revealed that the apparent volume of food can influence one's satisfaction from a meal," they said. "If the quantity of the food appears greater, the feeling of satisfaction is greater."

"Another study showed that eating in the presence of a mirror increases self-awareness, influencing people's behaviours to eat less," they continued. "Although the concept is yet to be formally tested, we believe Half/Full has the potential to change our eating habits for the better, while acting as a visual probe that raises our awareness around the impacts that climate change will have on our food and eating culture."

Food is becoming an increasingly explored area among designers. Dutch designer Marie Vogelzang began exploring the relationship between design and food while studying at Design Academy Eindhoven, and has gone on to tackle "mindless food consumption" with a set of strangely shaped tableware.

In 2014, she was made the head of the new Food Non Food department at Design Academy Eindhoven, which was the first course of its type in the world.

"There's so much wrong with food at the moment," she told Dezeen at the time of her appointment. "There's so much going on in the world of food that we need designers to start working on this in a serious way. It is the most rich and important material in the world." 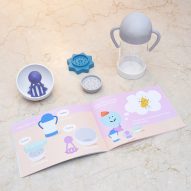