OMA has restructured a governmental office building from the 1990s, creating all-new types of workspaces for the Dutch ministries that occupy it.

Featuring acid-yellow escalators, angular black staircases and large open-plan areas, Rijnstraat 8 is designed to offer workspaces that are more flexible and adaptable than the ones contained in the building before.

These spaces will be occupied by the Ministry of Foreign Affairs, the Ministry of Infrastructure and the Environment, the Immigration and Naturalisation Service, and the Central Agency for the Reception of Asylum Seekers. But some areas will be open to all ministries located in The Hague.

"I have redesigned the building as a super flexible and sustainable multi-ministry building," explained OMA partner Ellen van Loon, who led the project.

"It increases the visibility between different departments and promotes the interaction between the activities within the ministries and the city life of The Hague, through its transparent facade and clearly visible entrances," she told Dezeen.

"The whole plan was to introduce new ways of working," added Bart Nicolaas, who acted as project architect. "We have multiple uses in one building, but there is no longer a fixed space for employees."

Previously known as the VROM Building, the 17-storey block was first designed by Dutch architect Jan Hoogstad. It was considered innovative when it completed in 1992, with a series of large atriums and offices contained in its wings. But the layout became outdated very quickly, as methods of working changed.

Van Loon's aim was to create a greater sense of hierarchy in the building, as well as improving visibility between departments. Her design involved adding and subtracting floors, creating new circulation routes, and introducing more open-plan facilities.

To achieve this structurally, new load-bearing elements were added to the exterior walls. Once these were in place, it became possible to make cutaways in the building's five cores.

OMA then transformed the fourth floor into a 140-metre-long, double-height meeting area, divided up into a variety of zones.

This is filled with different types of workspaces, so that employees from all ministries can find a space that suits their requirements – it even includes a sloping roof garden that has been nicknamed Teletubby Hill.

The new structural elements also made it possible for the architects to "invert" one of the existing atriums, creating more office space. Some of these new floors are suspended from above, while others are supported from underneath.

Metal staircases were then added to the insides of all four atriums, create more open connections between floors.

"It's quite an ingenious structure," Nicolaas told Dezeen.

"Before you never knew if you were in a wing or a corridor, but now you always have a sense of where other things are happening."

OMA's other interventions included widening the passageway that cuts through the base of the building, creating a sheltered plaza at its entrance – named the Rijksplein.

They also created a new facility for international congress – not dissimilar to the War Room in Stanley Kubrick's Dr Strangelove. It features a circular layout, with illuminated globe motifs in the ceiling and floor.

"I thought, this is the room where we need some drama," explained Ellen van Loon.

As well as adapting the architecture, OMA planned the entire fit-out of the interior. The team designed statement pieces, like a huge staircase that doubles as a presentation space and the yellow escalators that rise up from the lobby.

They also created carpet designs – ranging from monochrome stripes to marble patterns – and developed a range of new furniture pieces.

"In the end, we probably designed about 50 per cent of the furniture, which was never the plan!" said Van Loon.

"I'd say we designed it ourselves out of frustration because we couldn't find the exact pieces we wanted."

OMA won the bid to convert Rijnstraat 8 in 2014, not long after completing De Rotterdam – a "vertical city" complex that includes facilities for Rotterdam's municipal government. The firm's other office projects range from the Qatar Foundation Headquarters to the Rothschild Bank headquarters in London.

The Rem-Koolhaas-led firm collaborated closely with Ector Hoogstad Architecten, among other consultants that worked on the original build of Rijnstraat 8, to ensure that the remodelled building is as efficient as possible.

They were able to minimise the use of new materials – so that, of the 20 per cent of the building that was demolished, almost all of the materials found a new use. 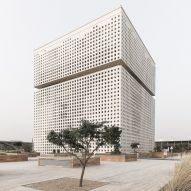 Photography is by Delfino Sisto Legnani and Marco Cappelletti, apart from where otherwise indicated.