This residence and nearby guest house for a principal of Carney Logan Burke Architects are meant to sensitively respond to their setting: a forested site that looks toward a verdant valley and towering peaks.

The Fish Creek Compound is located on a five-acre (two-hectare) site in western Wyoming, near the village of Wilson. Consisting of a main home and a guest house, the compound serves as a personal residence of firm principal John Carney and his wife.

Creating a home that embraced the natural context was a guiding concern. The gently sloping, forested site features a seasonal stream and clear views of the Sleeping Indian, a mountain peak to the east.

"The thick understory of berries, wildflowers and other vegetation attracts abundant wildlife, which is a constant reminder of the unique qualities of this very special landscape," said Carney Logan Burke Architects, a studio based in Jackson, Wyoming.

"The goal of the design was to create a compound in harmony with nature, where multiple generations of the architect's extended family could gather and experience the wonders of the site, while also serving as an intimate home for two."

The project was completed in two phases over the course of five years. The 950-square-foot (88-square-metre) guesthouse was finished first, which gave the architect time to fully understand all of the conditions of the site, including weather patterns and quality of light, before designing the main home.

The guest house consists of a simple rectangle oriented on an east-west axis. The small dwelling and its outdoor decks are meant to provide an immersive experience for visitors, both visually and aurally.

"Through its siting near a stream that provides the sound of rushing water, and large windows that open the intimately scaled rooms to the outside, the small house creates the feeling of actually being in the woods," the team said.

Cedar shingles and bonderised steel – galvanised steel processed through a phosphate bath – wrap the facades. Meanwhile, white oak was used for interior floors, doors and millwork. "A disciplined use of materials gives cohesion to this small outbuilding," the team said.

The main house was built farther up slope, where it is afforded commanding views of the valley and mountains. Encompassing 4,275 square feet (397 square metres), the house is oriented along a roughly north-south axis and consists of rectilinear volumes topped with overhanging shed roofs.

The two-storey home is tucked into the hillside and follows the contours of the site. The base is made of board-formed concrete, while the upper walls are clad in the same materials as the guest house. The entrance was placed on the upper floor.

"In order to take full advantage of the site amenities while keeping a low profile, the main house is tucked into the hill and entered from the upper level," the studio said.

Running alongside the garage is a covered pathway, which leads to a terrace and the front door. One steps into an open-plan kitchen and great room, where floor-to-ceiling glass provides a strong connection to the outdoors.

Adjacent to the public area is a private wing, which contains the master suite, a music room and a screened porch. A bedroom, an exercise room, laundry facilities and mechanical space are situated downstairs.

Founded over two decades ago, Carney Logan Burke Architects has an extensive portfolio of buildings designed in a regional modernist style. Other projects by the studio include a rustic cabin built on a fire-ravaged mountainside and a barn-shaped guest house made with reclaimed wood. 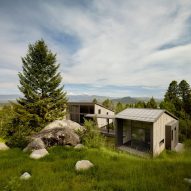 Five of the best houses in Wyoming on Dezeen