New York firm Barker Freeman Design Office has built a house clad in white cedar that sits directly on the beachin the south of the city.

Measuring 1,950 square feet (181 square metres), the Surfboard House sits on an ocean-facing lot that was reduced to sand after Hurricane Sandy in 2012.

The residence is located in Breezy Point, Queens, a quaint residential area that was hit hard by the storm, particularly after a fire – caused by floodwaters that touched electrical wires – burned 130 homes to the ground there. New York's famous Rockaway Beach, accessible from the city by subway, is just down the road.

Barker Freeman Design Office (BFDO) built the beach house in compliance with the area's codes. "Flood regulations required building at least six feet off of the ground, while co-op regulations put the maximum building height at 28 feet," said the firm. "The co-op also required a setback from the lot line of 32 feet at the lot's widest point."

The structure sits directly upon 68 feet (21 metres) of beach frontage, providing ocean views from nearly every room. The roof sections are wrapped in fibreglass to protect the house from solar heat gain, and their shapes are intended to subtly reference the pointed ends of surfboards.

Two entry points guide the layout's design, with stairs that lead from the beach to a large back deck, and a door on the west side that meets a pedestrian walkway.

Inside, a main living room features cedar-clad ceilings and sliding glass doors. The majority of surfaces are either white or wood, but a variety of colourful bathrooms were designed for the space.

One bathroom is wrapped in coppery-brown tiles, red flooring pops against an all-white shower in another, and a third bathroom is fully covered in turquoise, green and blue tiles.

The master suite is on the ground floor and children's rooms are upstairs, so spaces for adults and kids can be kept separate.

Sliding glass doors in the master bedroom join the back deck, with beach-front access. Three small bedrooms on the second floor each have their own corner views.

Rebuilding the Rockaways after Hurricane Sandy has also involved replacing the boardwalk along the popular beach, and plans to construct a community library by Snøhetta. 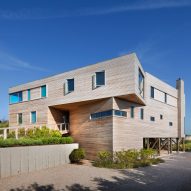