Architect Ole Scheeren has unveiled plans to build a 333-metre-high skyscraper in Vietnam's largest city, which will mimic the topography of the country's natural landscape.

Called Empire City, the building will be built near the centre of Ho Chi Minh City, in a rapidly developing area on the east side of the Saigon River.

It will be made up of three towers, which will rise up from a "mountain-shaped" podium. This podium will feature terraced gardens, designed to be reminiscent of Vietnam's tiered paddy fields, while the tallest of the towers will swell out near the top, to create an elevated garden, or "sky forest".

"I felt we should think about the future of architecture and of the city itself, and think of ways that nature and human beings can coexist," Scheeren told Dezeen.

"But we wanted about ways that nature could not only exist on the ground, but also high up in the sky," he said. "So we created a podium like a giant terraced landscape, to anchor three towers to the ground, and this landscape is then pulled up into the sky."

"This gives the public access to the incredible height of the building and allows them to really explore the organic forces of nature."

With a height of 333 metres, Empire City will be taller than any of Ho Chi Minh City's existing skyscrapers – far exceeding the 262.5 metres of Bitexco Financial Tower, the city's current tallest building.

The main 88-storey tower, called Empire 88 Tower, will contain apartments and a hotel, as well as the public observation deck and a top-floor events space, known as the Cloud Space. The podium will accommodate retail, while the two smaller towers will contain offices and homes.

Scheeren sees the project as an emblem for the future of the city's development.

"The city's leaders and planners are trying to find a future for the city that is really positive, that doesn't simply repeat the same problems that have come with other cities growing and densifying – they're trying to embed qualities and responsibilities," he said.

"They see this project as a very powerful statement of exactly that."

The architect founded his studio Buro Ole Scheeren in 2010, after a spell as a director at OMA. He has been based in Asia for over a decade, and has worked on high-rise buildings in Beijing, Bangkok, Singapore and Kuala Lumpur.

In a past interview with Dezeen, he said he liked working in Asia because it had "a certain fearlessness and vision for the future".

Scheeren claims there is an incredible energy in Ho Chi Minh City – and he expects it to transform in the next few years.

"It really reminds me of Bangkok many years ago," he said.

"If you look at how much construction is taking place, it's one of those moments where one could think it's unimaginable. But I've lived long enough in China to know things are possible that we would have never thought."

Scheeren ranked at number 161 on the inaugural Dezeen Hot List. 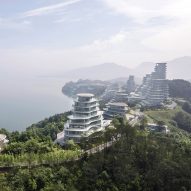