Airbnb's Dublin headquarters in a former warehouse and a high-rise hospital in Montreal are among the first category winners from this year's Inside festival awards.

Aiming to showcase the world's best interior design, the Inside awards also recognised a contemporary butchers shop in Taipei.

Further category winners will be revealed tomorrow. Each category winner will be put forward for the title World Interior of the Year, which will be selected on Friday.

Dezeen is media partner for both the World Architecture Festival (WAF) and Inside festival of interiors, which are taking place at Arena Berlin in Germany until 17 November 2017.

Here are the full details of today's winning interior projects:

Dublin-based practice Heneghan Peng Architects remodelled the interior of a disused warehouse in the city to create Airbnb's European headquarters. Offices are organised into a series of "neighbourhoods" connected by a large bleacher-style staircase that stretches from the basement to the first floor.

Judges praised the "clarity and richness" of the concept and its ability to create both "intimate and collective social encounters".

"This created a highly agile working environment both for its current use and future potential reuses," they added.

US-based Cannon Design and Canadian studio NEUF Architectes preserved a 19th-century church steeple and the facade of an old stone building within this high-rise medical facility in Montreal.

At 278,709 square metres, the Centre Hospitalier de l'Université de Montréal is already one of the largest healthcare schemes in North America. A second phase of the project will see offices, a conference centre, ambulatory spaces and parking added to the site.

Chinese and Taiwanese firm WZWX Architecture Group employed a sophisticated palette of walnut wood and granite for this butchers in Taipei.

Raw and cooked meats are displayed behind a glazed shopfront at street level, while an events space and restaurant are set overhead. 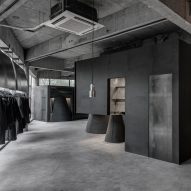